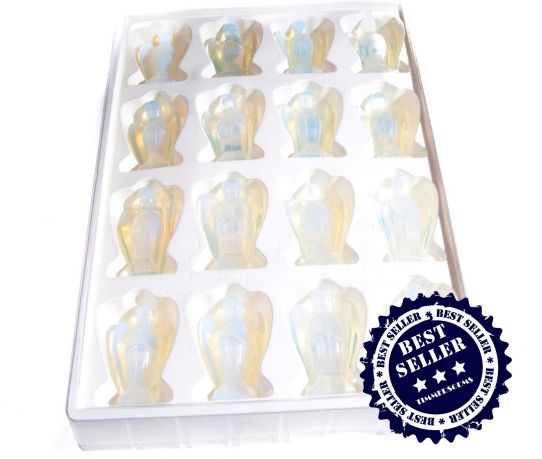 12 Dragons skulls format 40 mm medium THEY ARE BACK!

Bestseller NOWHERE CHEAPER! You can like it or not, but the angel Opaline-large 60 mm is worldwide the most sold ange at the moment.
Log in
Availability: In stock
SKU
432
Add to Compare
60 mm large angel made of real Opaline is available to buy in increments of 16
Details

Opaline is considered a versatile healing stone. It removes energy blockages and helps combat fatigue. It also purifies the blood, and the kidneys. Opaline is often used in meditation because it is associated with the third eye chakra. It is useful for the improvement of the communication at all levels. It helps in the interpretation of received psychic information and helps in verbalizing inner feelings. Opaline helps to stabilize mood swings, and to promote relaxation. It is beneficial for people suffering from slaapstoornissen.Opaline enhances emotional strength and helps changes and new situations easier to cover. It also relieves depression and reduces aggressive behavior. Opaline promotes success, especially in business doelen.Bij flu, cold and lack of energy. Elevates the ordinary consciousness to a cosmic consciousness. Strengthens the inner being.