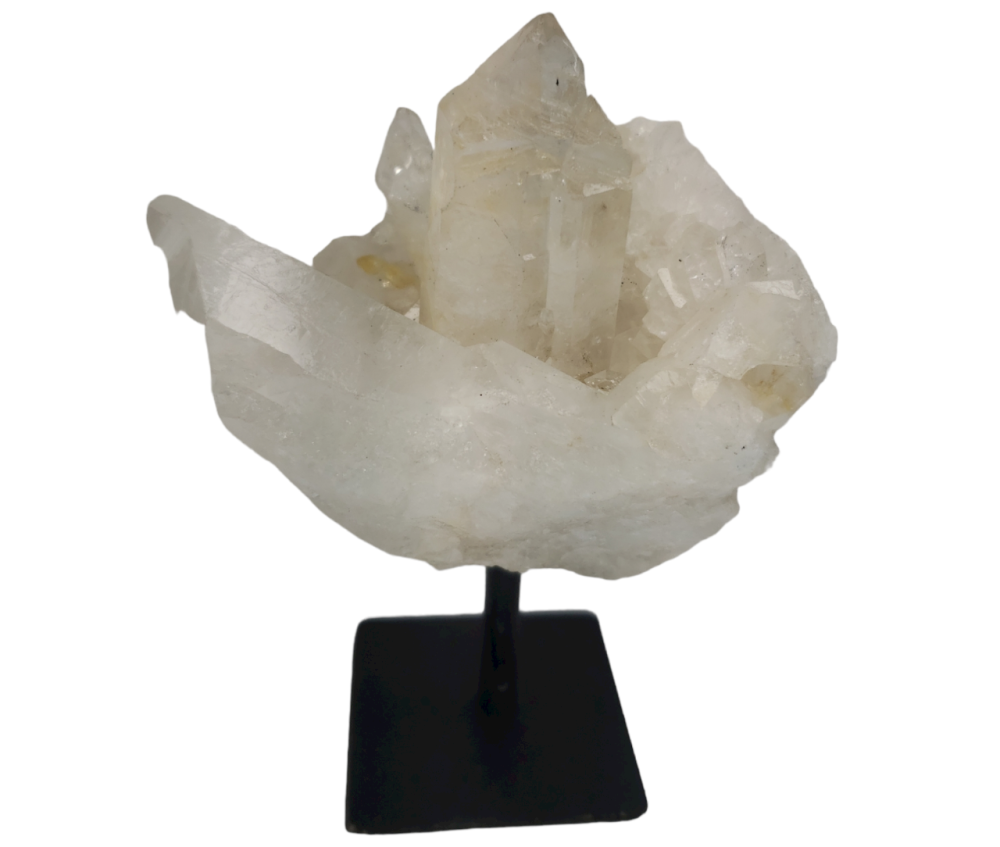 Kyanite from the “Rockshop” fistsize series on black stand.

15 Pins from the “Rockshop” fistsize series on black stand.

Rock crystal from the “Rockshop” fistsize series on black stand.

In addition to the small pieces, we now also have the 6 most popular stones on pin in a larger version! Packed per 3 pieces and available in Amethyst, Black Tourmaline, Sodalite, Kyanite, Rock Crystal and Green Aventurine
Log in
Availability: In stock
SKU
11947
Add to Compare
Rock crystal from the “Rockshop” fistsize series on black stand. is available to buy in increments of 3
Details
Rock crystal is the colorless and most common variant of the mineral quartz (silicon dioxide, SiO2). The name 'rock crystal' is derived from the Greek word "Krustallos" which means ice. Rock crystal was believed to be ice molded by the gods. Rock crystal was already known in the Mesolithic era. During the Roman period, it was marketed from the Alps under the name "petrified ice". Theophratus called it "krystallos". Pliny the Elder also mentions it. The name "quartz" was introduced by Georgius Agricola in 1529. The peoples of the East regarded rock crystal as a stone of patience and perfection. Tibetans use rock crystal to treat wounds. The choice of rock crystal as a drinking glass or as part of medieval jewelry can are attributed to the belief that these crystals would break or discolor if they came into contact with poison. Thus, the chain became an amulet that protected the king. Compare the Rudolphin Imperial Crown and the chain of the Jehovah's Order. Origin: Meganites, pegmatites, hydrothermal and alpine rock veins, alluvial deposits Occurrences: Rock crystal is widespread in nature, but not always in gem quality Historically known sites are India and Sri Lanka (near Tatnaputi) Iridescent quartz from the Pune region of India and from Myanmar is a rarity.Beautiful crystals come from Kenya and Madagascar, also from Brazil (Minas Gerais), Goisas, Bahia and French Guiana. In the US, rock crystal occurs in pegmatites, including in Maine (near Ausburn, New York, North Carolina, Arkansas (Crystal Peak) and California. Of particular significance are occurrences in the Alps. Rock crystals are found in Switzerland (e.g. near Urim where a crystal of 135 kg has been found in the area of ​​Saint Gotthard and Grimsel), in Austria (in 1965 a crystal of almost 1000 kg was found in a cavity near the Großglockner). , Poland and France In the collections of various museums are unique cut rock crystals.The Smithsonian Institution Washington possesses a cut stone of 7000 kt and a sphere of rock crystal with a diameter of 33 cm and a weight of 48.5 kg; Burma and is cut in China.
More Information
Product videos