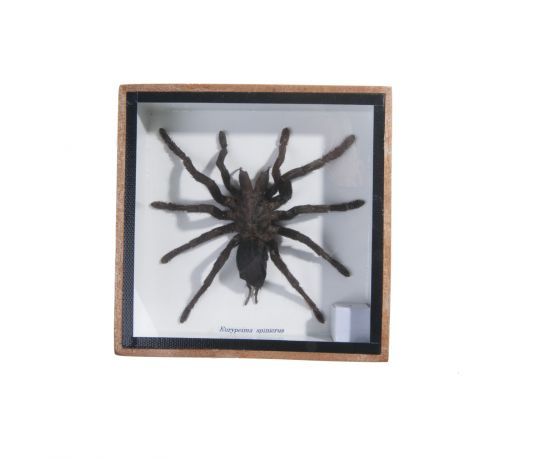 Some already shuddering at the sight of this picture, and yet we really guarantee that 1. it is really dead and 2 also had a natural death before being mounted!
Log in
Availability: In stock
SKU
541
Add to Compare
"Tarantula" aka Eurypeima spinicrus from Asia is available to buy in increments of 1
Details

Tarantulas (Theraphosidae) are a well-known family of spiders in the suborder tarantula species (Mygalomorphae). Many species reach a considerable height in comparison to other spiders. A number of species is sometimes farmed in a terrarium. Tarantulas, despite their size, relatively harmless. Most species are not very fast, non-toxic to humans and not aggressive, a bite in humans is similar to a wasp sting. There are exceptions that just extremely toxic and are quick and additionally attacks immediately so they are considered aggressive. Tarantulas are many people feared by the size and very hairy body. There are more than 900 species found worldwide but mainly live in tropical and subtropical gebieden.De most species are found in North, Central and South America, are also in Africa and Asia for many species and in Europe finally live only two kinds.

Tarantulas owe their name to the alleged practice of hunting birds, which, however, has no relation to reality. The name tarantula comes from the scientific name "avi cularia ', which literally means bird-eating. In a celebrated record from 1705 of Maria Merian Sibille (see drawing on the right) shows how a large spider devouring a bird. Here was initially reacted with disbelief, until the zoologist Henry Walter Bates in 1863 confirmed having seen a spider devoured a finch. Since then, the tropical spiders were seen as monstrous bird wasters. [Big spiders such as tarantulas seize any prey they can handle physically and attack everything that is not too large, including small vertebrates such as birds, rodents and lizards. However, its opportunistic captured prey, most prey are among the invertebrates. Of any spider known that birds even a small part of the menu and also within the spiders as a whole is no specialization known for catching birds. In practice birds are even more important than an enemy prey. The name tarantulas will be used for the family Theraphosidae. This name was originally given to the wolf spider Lycosa tarantula, although until today (incorrectly) used for all kinds of which are large and hairy, regardless of the group of spiders which they belong. Finally, the name banana pin also in vogue; it is derived from the fact that some large species worldwide pops by exports of bananas and other tropical products. So during the unloading of the cargo sometimes found a spider hitched from the country of origin. Because tropical products coming from countries all over the world, it can go to the most diverse species. The banana pins should by no means always the theraphosiden. Some species of tarantulashier desondanks hun Nederlandse naam aan te danken, zoals de gouden bananenspin (Pterinochilus vorax).