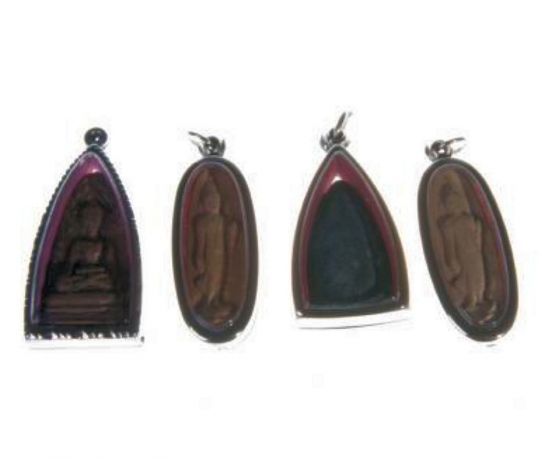 Hard to get because the Thai customs intercept them many times in a row because they see them as religious objects that cannot be exported.
Log in
Availability: In stock
SKU
635
Add to Compare
Thai Buddha lucky amulet pendants is available to buy in increments of 1
Details

The history.
For centuries conferring values ​​worldwide aanamuletten and talismans. Nowhere is the doings and amulets as high as in Thailand. The use goes back to BC. With the emergence of Buddhism has been preserved relic of little monks and deceased relatives, they were helped as a reminder but also as protection and good luck. It was not just pieces of clothing or hair of the deceased but also bones or teeth. Some stupas, pagodas chedis or are claimed to contain bones or hair of the Buddha himself. To date, attract many pilgrims to the tombs.

Over the centuries Buddhism has gained a large following and only in Thailand and there are tens of thousands of temples, and there are hundreds of pilgrimage arise from very well known to less familiar. All these temples and places have one thing in common, each temple has its own charm, with its own history and its own history. There are a dozen very famous monks in Thailand the status "Buddha" have gotten into their lives through meditation to achieve enlightenment. All these monks have something done for the Thai population, which disease, poverty, and disaster fails or disappears. Here there are hundreds of stories which are told with the most beautiful colors and scents. The monks of earlier centuries ago really had no fixed abode, such as a temple or monastery. She traveled the country to preach the teachings of Buddha. They sometimes slept in monasteries or with the locals, but mostly in the open air or in caves where they prayed and meditated.

A monk became known as he could fascinate many people with his stories and certain forces deployed as curing diseases, helping in poverty or restoration of peace and tranquility. When these monks were old and could no longer travel, was often in their hometown created a temple in front of him where they stayed for the rest of their lives. The prominence of these monks, many people came from far and wide to make bless themselves by him. As also in our present civilization we often want a souvenir of a person or place we have ever been. By the monks was a mold made with a small image of a Buddha. The monk introduced himself together a mix of clay mixed with other ingredients such as herbs, ashes or bone remains of animals. This clay was kneaded into a ball and pressed into the mold which gives you a

perfect impression was of miniature Buddha. Sometimes there on the back a prayer engraved or are being pushed stones or sticks. The amulet was taken out of the mold after which it was updated and put to dry. All this happened during the prayer of the monk.

Mini bronze Buddhas and taxis in Thailand can not find a taxi where no amulets, small bronze Buddha standing on the dashboard. Being in Thailand ultimate lucky charms and there are more of these Buddhas in Thailand than there are people. The most famous small and large are indeed the Buddhas that symbolize the day of the week, with Wednesday, two Buddhas.