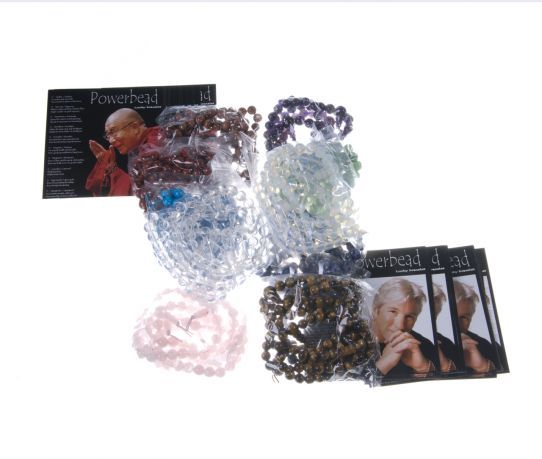 SET WITH 50 PIECES Without doubt the best selling gemstone bracelet in the world. Famous bearers his Holiness the Dalai Lama and his follower Richard Gere. Package with 50 pieces, 10 species each 5 pieces include Tiger Eye, Rose Quartz, Amethyst, Roc
Log in
Availability: In stock
SKU
791
Add to Compare
Powerbeads Power bracelets = Buddha bracelets is available to buy in increments of 50
Details

A japa mala or mala, literally pendulum is a rosary of beads in Hinduism, with a similar function of the rosary in Christianity. The japa mala usually consists of 108 beads, although other numbers which are divisible by 9, are also used. Malas are used to not lose count while reciting, chanting, or mentally repeating a mantra or name of a deity. A Buddhist prayer beads (mala, JapaMala) is a string of prayer beads used in Buddhism. It has a similar function of the rosary in Christianity. The prayer beads are used to not lose count while reciting or chanting. A Buddhist prayer beads consists of 108 beads in which a mantra should be prayers and four beads or one bead representing the four heavenly kings. A Buddhist prayer beads called in Japanese a Juzu in Standard Mandarin Fozhu or shuzhu and the Burmese a ba-di. A rosary is a string of beads used for reciting prayers. Known examples of such religious objects have the Rosary in the Roman Catholic Church, the tsjotki / komboschkini in the Orthodox Church, the tasbih in Islam and the japa mala in Hinduism. A mala is a rosary, which is mainly used by people with a Buddhist background. Nowadays you see that more and more people in the West to buy a mala and use it as a prayer necklace or wear it as a necklace or bracelet.

The Tibetans use this cord, especially the most famous mantra (short prayer, a holy verse or a magic formula) attached to it. Who does not know the mantra AUM MANI PADME HUM or as the Tibetans say: OM MANI HUNG PEME or OM MANI Beh MEH HUNG. ("Hail to the jewel in the lotus of my heart."). Many other short mantras are prayers for various purposes. If we consider that there is a rosary in the Catholic faith, it actually has the same function: It is a rosary with a number of prayers (Our Father, Hail Mary) aloud or in, for and by yourself all murmuring in the church or sometimes before bed. A Mala usually consists of 108 prayer beads, but also from 54 (half) or 27 (a quarter) beads. The 109th bead (or the 55th or 28th) called Sumeru or Mera symbolizing the crown. This Sumeru should not be used as a prayer bead but is a turning point, start point or end point of the mala. The first bead is always the bead left of the Sumeru and the last bead, the bead right next to the Sumeru.

The mala is used in the right hand clockwise so that the little finger and index finger in no way affect the bead or cord. Thus, only the middle finger and ring finger moved across the bead at the bottom with the thumb. One arrives at the Sumeru and want for a second time, a series of 108, 54 or 27 chanting mantras, the mala is rotated half a turn so that you continue back to the right and you are not left back. The final bead is then again the first bead. If one is planning to by several times the mala prayer (JAPA = litany repetition of prayers, spells and divine names), you can capture using eg loose mineral particles or anything like the required number for you on the table and each time one to set aside, so that the mind is not distracted by the phone to keep up. So there are more tools to focus your thoughts on the whole mala, not keeping the count.

You see a lot of malas (108 beads) or sumirdi (27 or 54 beads) with different types of beads. Well known are the malas seeds of the Rudraksha tree and the Lotus Flower. You also see malas complete with rose or sandalwood tulsihout but also conches. The more expensive malas are made of crystal or silver beads or pearls.

How to use a mala / powerbead