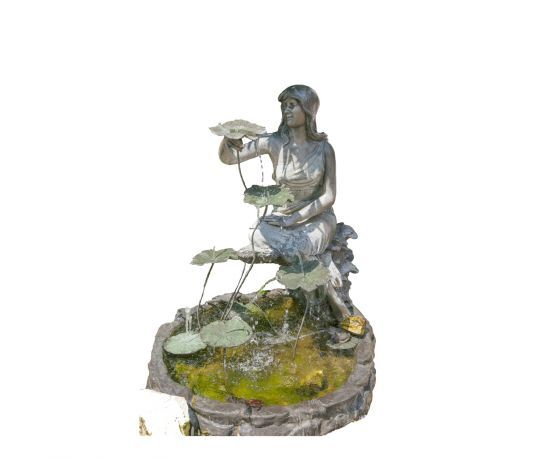 Beautiful stream from one to another lily pad. Very nice and not expensive.
Log in
Availability: In stock
SKU
620
Add to Compare
Art Nouveau bronze fountain with beautiful lily leaves. WITH 50% DISCOUNT is available to buy in increments of 1
Details

Jugendstil, or Art Nouveau is an artistic movement that was popular between 1890 and 1914 in various places in Europe, mainly in response to the shape fading impressionism. Nouveau manifested itself particularly in consumer products (glass art, pottery, jewelry, furniture, etc.), architecture and painting. The movement had a brief but intense flowering period. In Western Europe, the style was well before 1910 already history, in the east could they survive longer. The term Art Nouveau goes back to the name of the weekly Die Jugend published in Munich from January 1896. For related currents that came to flourish elsewhere in Europe are also other terms in use, one of which, art nouveau, art nouveau as well as an umbrella term has become. Art nouveau remains generally reserved for Belgium and France, while Liberty is linked to Austria and Germany. In Dutch two terms in use, with the French term Art Nouveau is also used in the translation new art for the expression of the style in the Netherlands itself. In addition, in mocking phrase is spoken of slaolie-, spaghetti or vermicelli style. Designations for other local variants are the Austrian Secession, English modern style of Liberty style, the Catalan Modernism and the Russian still modern. Despite the significant regional differences, there are some features that unite these currents: an optimistic worldview and faith in the future, a predilection for the use of new, modern techniques (in architecture such as large glass surfaces), a dislike of symmetry and a preference for ornamentation, with floral and bird motifs dominate. An Art Nouveau product is a Gesamtkunstwerk often because the same stylistic return in the building, furniture or decorative objects. In the Netherlands there were innovations in architecture and applied arts. There were several, sometimes mocking names for this style invented such as vermicelli, slaolie-, Berlage or within Identity or style nouille because the lines. The term "salad oil style 'originates from a design for a poster from 1893 by the Dutch Oliefabrieken (NOF) Calvé-Delft for the promotion of" growing numbers ". It was one of the first manifestations of Dutch Art Nouveau, made by Jan Toorop. In a sense, Toorop has served as an example for other large (Austrian) Art Nouveau artist Gustav Klimt. The other names stemmed from very different starting points and different forms, which were distinguishable. For convenience, the new Dutch style but was eventually assigned to the international Art Nouveau or Jugendstil. The key components of the Dutch style anyway represent a unique direction in 1960 has led to the touch in use of the name New Art. This gives name, like Art Deco and Art Nouveau, that the flow was new and young and wanted to distinguish style from previous periods. The most popular form of decorating in the New Art was a geometric figure, sometimes in the form of blocks or a series of blocks, sometimes highly stylized plants or animals. We see this for example in the work of Jac. van den Bosch.