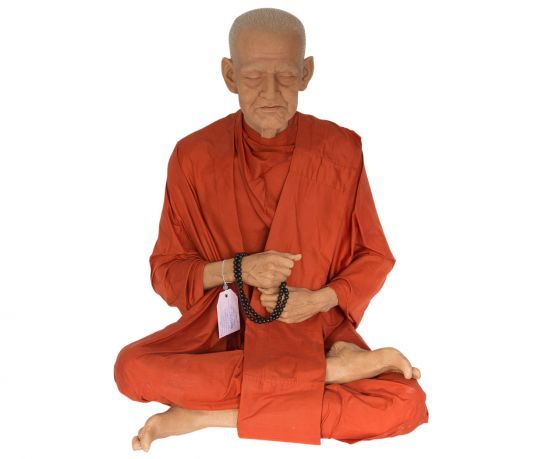 Kwanyin on elephant made of alabaster also called soapstone

Wonderful life great monk. Of this size are being produced worldwide only 7 units per year!
Log in
Availability: In stock
SKU
4969
Add to Compare
Details
In Buddhism are mainly in Thailand monks very important, they also take an important place in the Thai society where life still goes on for a part in the cave temple. Many Thai have in their house a picture of a Buddha but often are of a monk with a big meaning. Often monks from the past that may have done much good and not forgotten. The images of monks are true works of art that then by coastal real collectors are made of wax and fiberglass. Because today there is a good quality resin is used, images are less susceptible to higher temperatures and therefore now they remain beautiful for an average Thai family's home where there is often no air conditioning. The production process is rather complicated, first one makes a negative is made of a model which later which made a plaster cast with a latex mold. The positive figure will be used later to make a one-time afgietsen of the real work of art. The main mold shall be filled with the resin and let it harden. (Arms, legs and head castings are gained separately to prevent breakage) later put it all together and edit it the image using special tools to give a natural appearance they. Shall bear birthmarks and tatoos and carefully put one piece piece of the hair fixed on the head and, finally, one makes the clothing exactly to size.
More Information
Product videos
Downloads