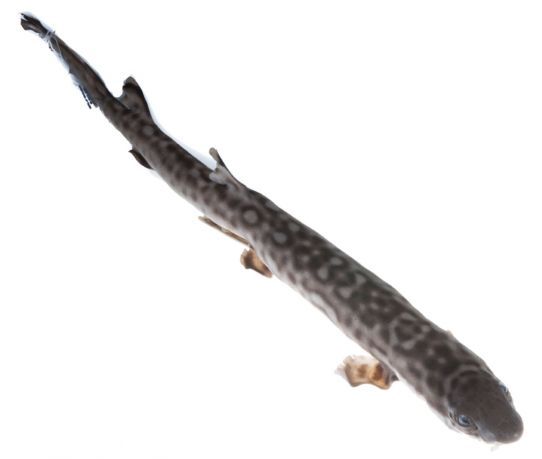 Shell from the Philippines

Really stuffed shark from the Philippines

The tiger shark (Galeocerdo cuvier) is a large shark species. Galeocerdo the name is a contraction of the Greek galeos (shark) and the Latin cerdus (representing the stiff bristles). He is the only member of the genus of the family Galeocerdo requiem shark (Carcharhinidae). The scientific name refers to the cuvier biologist Georges Cuvier. The range of this shark mainly concerns the tropical and warmer subtropical and temperate seas. Occasionally one ever comes against a tiger shark in the Mediterranean Sea and the North Sea; however no significant, permanent residence sites for this species. Today, some researchers suspect that several marine species -including the tijgerhaai- their habitat are expanding due to climate change, overfishing and Gulf Stream changes in their habitats. This could therefore be a reason that this species nowadays in the last two European seas are rarely detected. The tiger shark is the largest member of the family of requiem shark. He owes his name to its striped back and flanks. This tiger-like drawing can be seen especially in young specimens, and fades as the shark matures. The striped pattern is a form of camouflage which is also called disruptive coloration is called, in which the contours of the shark opposite to the fading background. The belly is white and behind the eye is a special spiral kieuworgaan that carries oxygen to the eyes and brain. The shark has an excellent sense of smell and eyesight and can detect electric fields. The tiger shark is an omnivore and one of the few sharks that is dangerous to humans. The maximum length is about 5.5 meters, outliers can be even greater but are rare. These sharks all have a nictitating membrane (a membrane which can move over the eyes), two dorsal fins, an anal fin and five gill slits. The tiger has gathered a remarkably short and blunt snout. The tiger mates once in three years. Propagation is by internal fertilization. The shark is the only species in its family that is ovoviviparous; The eggs are hatched internally, after the boy as embryos come alive in the world. The male shark brings fertilization with his sexual organ (claspers) the sperm into the genital opening of the female (cloaca). During mating, the female is held with the teeth. Many females will bear scars on the back and flanks. The boy spend 16 months in the womb through which the nest can vary from 10 to 80 youngsters. Newborn tiger varies in size between 50-75 centimeters. After about 10 years the shark adult. It is still unknown how old tiger sharks: an estimated 20 years.