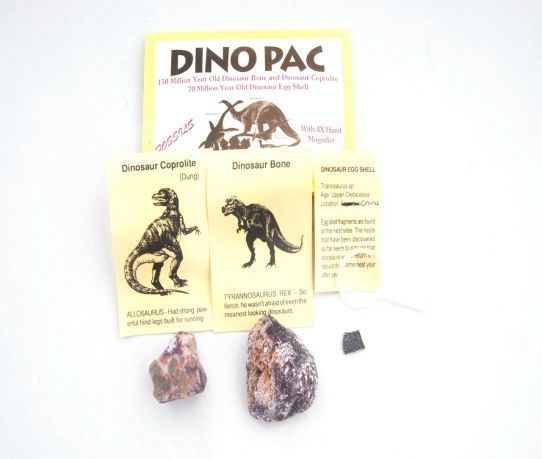 Beautiful bag with lots of information about American dinosaur remains. Great fun for kids!
Log in
Availability: In stock
SKU
98
Add to Compare
Dino-pac / USA is available to buy in increments of 1
Details

The dinosaurs and dinosaurs (the first name is the correct translation of Dinosauria, the scientific name of the group) are a group of animals belonging to the Archosauria, which dates back to the Mesozoic. The Dinosauria originated about 230 million years ago in the Triassic, where the division within the wider group of dinosauriformes. The first dinosaur was a small bipedal carnivore. That was the direct ancestor of the two main groups in which all other dinosaurs can be divided: the Saurischia and Ornithischia. In these two groups quickly developed also herbivorous species. The dinosaurs were dominant at the end of the Triassic, when the country became extinct most other large animals. During the subsequent Jurassic and Cretaceous dinosaurs were 140 million years, the dominant land animals, probably the greatest that ever lived. Thousands of species, carnivores and herbivores, developed in various forms, including by moving apart the continents. The marine reptiles of that time and the pterosaurs, flying reptiles, however, were not dinosaurs. At the end of the Cretaceous, 66 million years ago, most dinosaurs became extinct, possibly as a result of a meteorite impact. Living dinosaurs are the birds. Since 1808, in 1842 the extinct dinosaurs are scientifically described and the group got its name, meaning "fierce dinosaurs" means. Between 1870 and 1925 many dinosaur fossils were discovered, particularly in North America. Then the interest declined sharply since 1968 but there is just a substantial revival of the investigation, called "Dinosaur Renaissance". Especially in China and Argentina are hundreds of new species found. There are much improved insights gained about their relationships, structure and habits. Former popular science books on the subject will become totally obsolete. Because of the shape wealth of dinosaurs is to identify the typical characteristics of the group difficult. Not a particular characteristic makes an animal a dinosaur but the fact that he is a descendant of the first dinosaur. Apart from big dinosaurs were, and there are also quite small. Dinosaurs are reptiles and are at least partly scaly skin and reproduce by means of eggs. Unlike other reptiles present, the existing dinosaurs, birds, warm-blooded. Unknown and debatable to what extent the extinct dinosaurs were warm-blooded and possessed a plumage or coat. Small species of dinosaurs had, even if it were no birds, presumably a high metabolism and several of their fossils show the remains of feathers or hair. Most scientists now believe that all dinosaurs, even the largest, were fairly active animals instead of slow or cumbersome, which explains their evolutionary success.