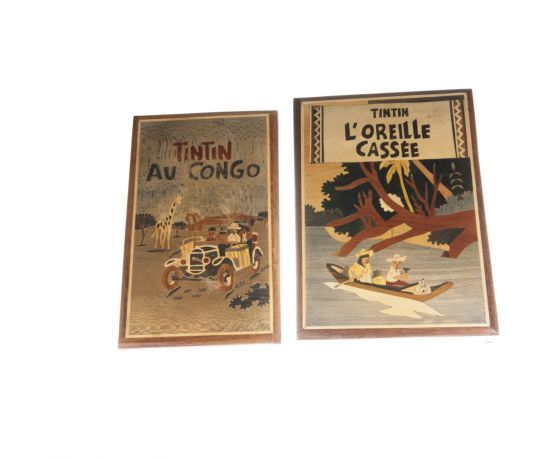 It will anyone speak to the imagination, Tintin is indeed world famous and many people collect objects with Tintin displayed on it.
Log in
SKU
6122
Details
Tintin is the English name for the fictional main character in the comic book series The Adventures of Tintin. The origin of French language comic series written by the Belgian artist and writer of comics Georges Remi (1907-1983), who worked under the pseudonym Hergé. In the Christmas issue of December 30, 1928 of the Belgian satirical weekly Le Sifflet Hergé published two balloon strips, first published by him. One was about a boy with a white wire-haired fox terrier. The balloon strips catch on and Hergé's boss Fr. Norbert Wallez asked him with two similar figures to make a sequel trip that takes place in the Soviet Union. The two were first as Tintin (until 1943 he was in Dutch named Tintin) and Milou (even much later in Dutch Bobbie) pictured on January 4, 1929 in the Belgian conservative Catholic newspaper Le Vingtième Siècle, Wallez which held sway. It was no more than an announcement of the strip, which was given the name of "les Aventures extraordinaires de Tintin, reporter, et de son chien Milou, au pays des Soviets" (the extraordinary adventures of Tintin, journalist, and his dog Milou in the Soviet Union "and consisted of exactly one picture. Tintin did not have any crest. That he was still in the course of the first strip. Hergé gave as his reason that he at that time still could not draw as well and, therefore, differences in the images of Tintin. For the visibility he gave Tintin a quiff. The first episode of the comic appeared on January 10, 1929 in Le Petit Vingtième, the children's supplement of Le Vingtième Siècle. The first comic book Tintin in the Land of the Soviets. With 142 pages, it is completely black and white album directly thickest album of the series. After the publication of Tintin en Amérique (Tintin in America) took publisher Casterman publishing itself. The first Tintin comic strip in Dutch appeared in late 1940 in the Belgian newspaper Het Laatste Nieuws. Tintin was called Tintin. That changed in 1943 with the publication of the comic The mysterious star, when Tintin was elected. That name was first printed on October 27 1943, in one of the daily episodes of The Shooting Star. At its launch in the daily section of the Latest News with The Shooting Star, was in the weekly children's supplement of this newspaper the Tintin comic Split Ear (in later editions, the broken ear) is not yet completed; where Tintin therefore still called Tintin. This strip ended in Latest News on February 23, 1944. Since then, Tintin is called in all English publications only Tintin. Also some cartoons of feature-length and short animated films were made based on the albums. In the sixties appeared two live-action films about Tintin, Tintin and the Secret of the Golden Fleece and Tintin and the Blue Oranges, in the 21th century followed by the 3D animated film The Adventures of Tintin. In addition, numerous film strips were made for magic lantern. Were also bags, calendars, etc. issued with pictures of the cartoon hero and his friends. Furthermore appeared under more stamps and books about Tintin.