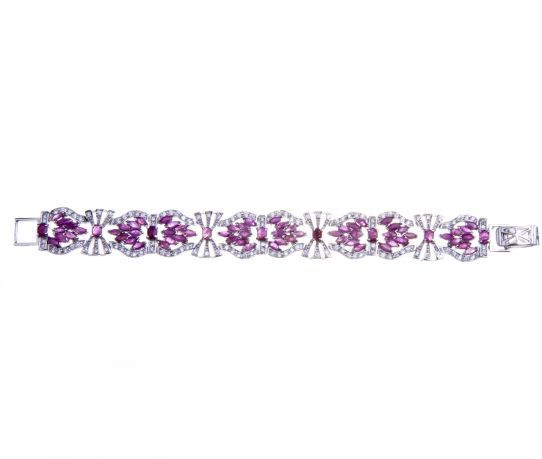 Wonderful quality rubies from Chanthaburi / Thailand, which is known for the finest rubies in the world.
Log in
Availability: In stock
SKU
338
Add to Compare
Top 925/000 jewel Faceted Rubies with zirkonias is available to buy in increments of 1
Details

Ruby (from the Latin ruber "red") is a red gemstone, a variety of the mineral corundum which the color is caused mainly by chromium. Natural rubies are exceptionally rare, while artificially manufactured ones are relatively cheap. In addition to the bright precious stone ruby ​​is also the less bright gemstone of the same name. This stone has been used since ancient times appreciated. The oldest written sources on the extraction of rubies are reporting grooves in Burma. Hence came the stones via trade routes to the courts and to the temples of the ancient Egyptians and Greeks. In the Middle Ages, rubies were also popular in Rome. Initially they were crafted into an oval shape. The very large and beautiful stone also have their own names. The ruby ​​was regarded as the living stone, which strengthens the heart and strength returns. In antiquity and the Middle Ages were known to rubies magical powers. In the Bible, the value of the ruby ​​also recognized, though it is in some of these passages point is that there are treasures of greater value: the wisdom is more precious than rubies (Proverbs 3:15) and the value of a good wife is that of rubies in the eyes of her husband far above (Proverbs 31). In Job 28 ruby ​​is mentioned as one of the treasures that we seek in places where the priceless and impressing wisdom of the living God is not to be found. It should be considered that what is sometimes identified in the KJV as "ruby" in some translations under very different designations emerges. One needs to take into account what this interpretation in the culture and the time of the drafting of the relevant translation was regarded as valuable. Ruby also has mythological significance. Ruby is one of the "nine gems" in Thai Order of the Nine Gems. Rubies are mined in Africa, Asia and Australia. They are most commonly found in Burma, Sri Lanka and Thailand, although they are also found in Montana and South Carolina. Rubies have a hardness of 9 on the Mohs hardness scale, and are among the natural gems in hardness only surpassed by diamonds. Other varieties of corundum are called sapphire. Ruby gemstones are valued according to several characteristics such as size, color, clarity and cut. All natural rubies have imperfections and only artificial rubies may be completely free of imperfections. The fewer the number and less obvious the imperfections, the more valuable the ruby ​​is, unless there are no imperfections (ie, a "perfect" ruby). In that case, could be the fact that it is an artificial ruby. At some artificial rubies added substances so that they can be identified as artificial, but most require the intervention of a specialized appraiser in order to determine the exact value.