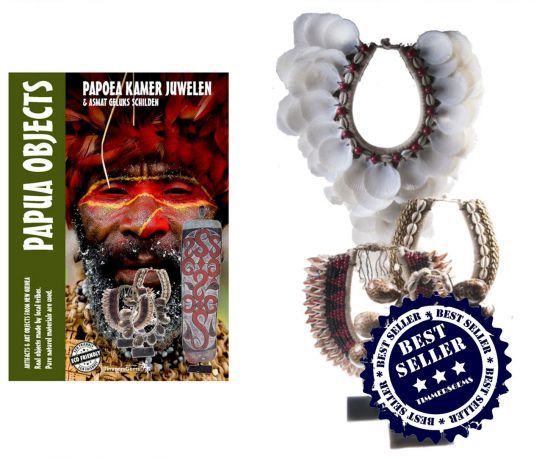 In 2015, we were personally acquainted with one of the most primitive peoples of the earth, the Papuans of New Guinea, and the love is great. TG imported in 3 years more than 1100 necklaces which are equally popular amongst interior designers and hot
Log in
Availability: In stock
SKU
526
Add to Compare
Papua Neck Collier (7 models) on standard is available to buy in increments of 6
Details

The Papuans are the original inhabitants of New Guinea island and some neighboring islands. They live scattered across two countries; Indonesia (the provinces of Papua and West Papua, for 2000 together Irian Jaya) and Papua New Guinea. In addition, live by emigration Papuans in the Western world, especially in the Netherlands. New Guinea is inhabited by nearly one thousand different tribes and there is almost an equal number of spoken languages, which are divided into two language groups, a mutually very diverse group of Papuan languages ​​and deAustronesische languages. The speakers of the Papuan languages, the largest group, live mainly on the island of New Guinea and the speakers of Austronesian languages ​​live mainly on the islands of the north and east coast of New Guinea and in a narrow coastal strip of New Guinea. With Papuans are usually referred to the speakers of the Papuan languages, but sometimes also means the Austronesischsprekende among minority. The Austronesischsprekende strains are also referred alsMelanesiërs, in Melanesia, New Guinea, where a part of.

Papuans behind the scenes and Papua artist at work
Recent evidence shows that the Papuans are descendants of the first group of residents who had settled in New Guinea. These original inhabitants came at a time when the island by way of a land bridge was connected to the rest of the Australian continent. These people were then closer strait crossed from the islands of Wallacea and Sundaland, the current Indonesian Archipelago. Archaeological finds have shown that the first settlement of the island occurred at least 40 000 years ago, about 10 000 years after the first modern humans from Africa had left. The ancestors of the Austronesian peoples came much later, about 3500 years ago, as part of the gradual migration of seafaring nations from Southeast Asia, which may have originated in eastern China. Austronesischsprekende peoples colonized many of the islands located to the north and east coast of New Guinea, such as New Ireland and New Britain, and also on the coast of New Guinea. The settlement over a period of tens of thousands of years has led to a great diversity of peoples and languages, which was further enhanced by the arrival of the Austronesiërs and in the recent history of the colonization of Europeans and Indonesians. The western part of New Guinea was from the late nineteenth century until independence from Indonesia in 1949, part of the Dutch colony of the Dutch East Indies. Between 1949 and 1962 it was under the name of Dutch New Guinea, an overseas territory of the Netherlands. After six months under the UN administration (UNTEA), this was to have been part of New Guinea handed over to Indonesia on May 1, 1963. Since that province under the name Irian Barat was, and from 1970 Irian Jaya. Nuvola single chevron right.svg See also the section Transfer to Indonesia in the article Dutch New Guinea for the transfer to Indonesia and especially then and to date is the Papuans asked for independence from Indonesia, which is seen by them as the occupier. From 1965 it was the Organisasi Papua Merdeka (OPM) (Organization for a free Papua) who fought for independence from the interior of the Bird's Head. On July 1, 1971 called the OPM, the independence of the Republic of West Papua from. The armed wing of the OPM held around this time to exist, even if the OPM is still a symbol of a free Papua seen. The armed struggle was continued by including the Tentara Pembebasan Nasional (TPN) (National Liberation Army) and the Pasukan Pembebasan Nasional (Papenal) (National liberation forces) that especially in the border region of Papua New Guinea are active. Also pursue the Papuans by diplomatic means to independence, including the United Nations and the US Congress continue to demand their right to self- determination. The representatives of the Papuan people come together in the Papuan Congress. The eastern part of New Guinea was divided in 1884 into a German colony in the northern half and a British colony in the southern half, which took over the administration in 1906 to Australia. After the First World War, Australia, the mandate of the German Emperor Wilhelm Country and after the Second World War, these two Australian territories were merged under the name Territory of Papua and New Guinea. In 1975, the eastern part of New Guinea and east of these islands independence as Papua New Guinea.