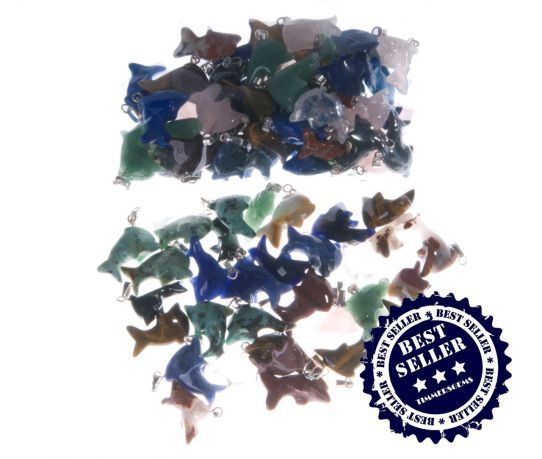 Assortment with 100 hand-polished gemstone dolphins . In many stonesorts like : Onyx, Unakite, Yellow Calcite, tiger eye, jasper, etc. An ideal gift for all dolphin lovers.
Log in
Availability: In stock
SKU
806
Add to Compare
100 Gemstone dolphin pendants is available to buy in increments of 100
Details

Gemstones are rare rocks, which are usually processed and used in jewelery and decorative objects. Gemstones have the following characteristics: Beauty. This includes visual aspects such as color, luster, fire, transparency and lighting effects. Durability. Here we look at hardness, fragility / cleavage and chemical resistance. Rarity. Here we look at how often a product found in nature. Gemstones can be cut into many different shapes. The basic distinction is made between cabochon, wherein the gemstone is polished in a convex shape, and faceted, wherein the surface of the gemstone will be cut in different facets. When grinding one looks at various characteristics of the stone, including the color, color distribution, inclusions, special lighting effects, dispersion and broken and slijvlakken. They are processed into necklaces, earrings, bracelets and many other jewelry, but the gems are used in the industry to process. Known gems include diamond, ruby, emerald, sapphire, aquamarine, topaz, tourmaline, amethyst, citrine, carnelian, opal, onyx, turquoise, lapis lazuli and garnet. In the 18th and early 19th century it was fashionable to make jewelry that person's name or initials were processed. When choosing the gems were allowed to be guided by the first letter of the name of the gemstone, and so arose the gems alphabet. Were also made similar achrosticon jewelry during the nineteenth century in which sentiments were expressed in gemstones. Best known is the English 'regard' ring, an engagement ring where the word' regard '(reverence) was formed by the precious ruby ​​(ruby), emerald (emerald), garnet (garnet), amethyst, diamond (diamond)

In the Mediterranean, they traditionally attached particular importance to the dolphin, by his intelligence, by his man was committed. He was a symbol of speed and security. He was regarded as the savior of shipwrecked. The Greek singer Arion was brought after a shipwreck by a dolphin on land. The god Apollo took the shape of a dolphin in order to transport people to Crete where they could build a temple for him. By Etruscans (or Etruscans) were the dolphins who carried the souls of the deceased to the afterlife across the sea. In Christian art Christ is sometimes represented as a dolphin. The dolphin was also regarded as the king of fish. In the French language was named heir to the throne 'Dauphin' (= dolphin); They also conducted a dolphin in their arms. Was there a book 'ad usum dauphini' (= 'for use of the Crown Prince'), it meant that the content was cleaned and purified of all sins, so that the text could come to face the crown prince.