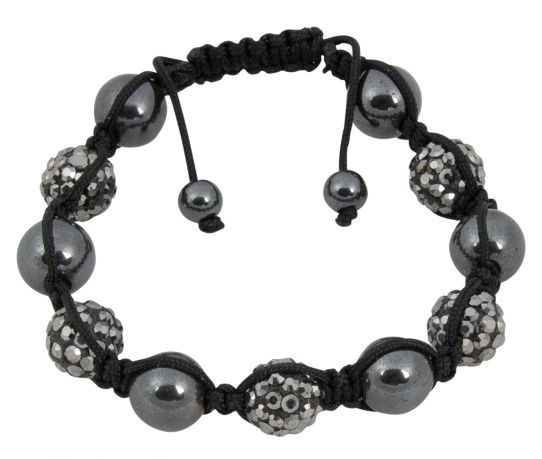 Shamballa - bracelets with real hand cut gemstone spheres and hand placed Zirconia - These bracelets remain immensely popular. Without a doubt, this piece of jewelry sold to many popular stars on the Dutch and Flemish Radio & TV
Log in
Availability: In stock
SKU
559
Add to Compare
Hematite Shamballa Bracelet (Beautiful Brazilian Hematite) is available to buy in increments of 1
Details

Hematite (from Greek: αιμία, Haima, blood) is a mineral that consists primarily of ferric oxide crystals (iron (III) oxide, Fe2O3), one of the iron oxides. It comes in addition to other varieties like the red blood stone and gray-black to black gloss iron and iron oxide. The mineral has a hardness between 5 and 6. The so-called stripe, stripe or color, the color issuing the mineral to rub on an unglazed porcelain dish, usually a characteristic blood-red - the mineral it takes its name. It may contain trace amounts of magnesium, manganese and titanium mineral. Hematite comes both before and going as mineral in sedimentary layers. It is often the cause of reddening of many rocks. Along with hematite are common for other iron ores such as magnetite, limonite and ijzerspaat. If magnetite is converted to hematite is called martiet. The mineral occurs worldwide, in Europe, in Germany, among others in the area of ​​the Lahn which is the world's largest concentration of iron ores in the Eifel Mountains, the Harz Mountains and the Thuringian Forest. Furthermore, in England in Cumberland and North Lancashire, in Belgium in Vezin and Namur, on the Italian island of Elba and in Spain. In Africa, Algeria is a significant producer and in the United States of America it is found at the Upper Lake and at the Missouri. More than half of world production currently comes from China, Brazil and Australia. In addition, the mineral is also in high concentration on the surface of the planet Mars. This creates the typical orange-red color of the "Red Planet". Hematite exists in a pure state of 70% iron and is the main iron ore. Due to the high temperature recovered to let react with carbon is iron. In addition, hematite is used as a polishing agent, and because of the high reflectance for a long time as a mirror. The red color and the fact that hematite is non-toxic, making it very suitable as a mineral pigment. Already in the Stone Age it was used for petroglyphs and body paintings. Artists use pressed pins of hematite for drawings and sketches. Such markers are soft and good colors. Red bolus, a strong clay-containing hematite species, is widely used as a primer to gild. If hematite pigment is suitable for painting ceramics and dyeing of yarns for carpets.