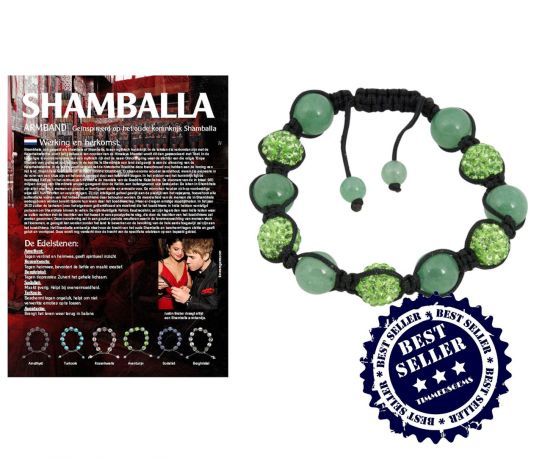 Shamballa - bracelets with real hand cut gemstone spheres and hand placed Zirconia - These bracelets remain immensely popular. Without a doubt, this piece of jewelry sold to many popular stars on the Dutch and Flemish Radio & TV
Log in
Availability: In stock
SKU
557
Add to Compare
Aventurine shamballa bracelet (Beautiful Aventurine from South India) is available to buy in increments of 1
Details

Aventurine is a green to reddish-brown variety of the mineral quartz. Usually, this gemstone comes in green and cut variant. Aventurine has hardness 7 and is among others in Russia in the Urals and China. Aventurine is like many other varieties of quartz (eg, amethyst and rose quartz) cut so it can be used as jewelry. The chemical composition of aventurine is SiO2 + KAl2 (OH, F) 2 / AlSi3O10 + Cr. The Ancient Greeks sewed Aventurine in the clothing of a warrior in order to maintain his courage, ambition and optimism.