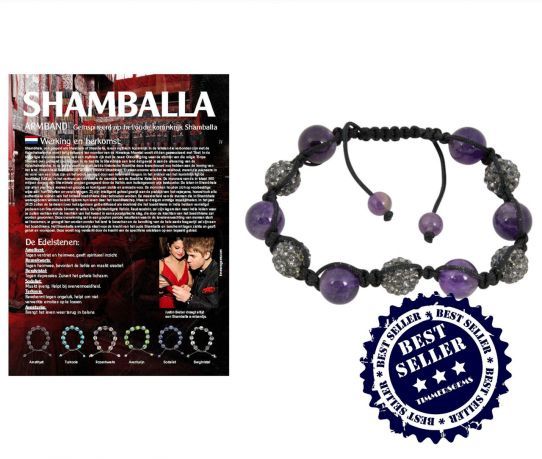 Shamballa - bracelets with real hand cut gemstone spheres and hand placed Zirconia - These bracelets remain immensely popular. Without a doubt, this piece of jewelry sold to many popular stars on the Dutch and Flemish Radio & TV
Log in
Availability: In stock
SKU
563
Add to Compare
Amethyst Shamballa Bracelet (beautiful dark Uruguay Amethyst!) is available to buy in increments of 1
Details

Amethyst violet is a variety of the mineral quartz (SiO2) and is the most sought after stone from the quartz group. Etymology: The name comes from the Greek αμεθυστoς (amethystos). Amethyst was already known to the Egyptians, Etruscans and Romans, and Pliny the Elder amethyst already described. In ancient China, were cut out of amethyst little gems. In the Middle Ages amethyst also highly valued in Europe. He was named bishop stone, because it used to be a popular gemstone for dignitaries, and he would possess magical powers. It was the symbol of lovers stone of temperance, protector against sorcery and witchcraft. By Jacob van Maerlant is found the statement that the stone intoxication dissipates. It has been assumed that the Greek name "against the intoxication" would mean: a wine that is drunk from a cup made of amethyst, one could not be drunk. Genesis: Metamorfieten, hydrothermal, alluvial deposits. The crystals grow ever on a base, the prisms are often poorly developed and therefore dominate the crystal spiers spit amethyst; Here is also the color most powerful. These sections are knocked, ie broken down for further use. By burning at a temperature of between 470 and 750 degrees arise light yellow, reddish-brown, green or colorless varieties. There are amethysts which gradually fade in daylight. With radium is to restore the original color. The color is caused by iron in combination with ionizing radiation. In artificial light amethyst is less attractive. Occur as early as the Middle Ages, Brazil boasted its deposits of amethyst, they are among others won in Bahia, Minas Gerais and Mato Grosso. Recently in Bolivia won the so-called ametrine, an amethyst-citrine, with alternate violet and yellow colors, but the transition between the colors is sharply limited. Amethyst are also known in the United States, nl.in Montana, Maine, Georgia and Arizona. In Canada, Mexico, Bolivia, India, Myanmar, Japan, China and Korea, and Sri Lanka, Zimbabwe, Congo and Australia are also major producers. In Russia, amethyst, among other things found in the Urals, Yakutsk and on the Kola Peninsula. Amethysts are also found in Armenia, Germany, Czech Republic, Slovakia, Bulgaria, Switzerland and Ireland. Amethyst is rarely more pure crystals. The British Museum is a unique polished stone of 343 carats. Other smaller stones weigh less; They usually come from Brazil. The Smithsonian Institution in Washington DC possesses even a cut amethyst from Brazil of 1362 carats and one from North Carolina from 202.5 carats. Amethysts were often used in state jewels like the scepter of Catherine the Great and the scepter of the British Crown.