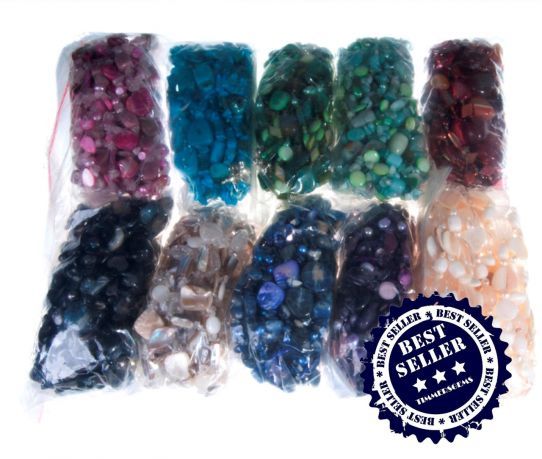 Native neck necklace to wear around the neck. very unique.

100 pieces with locks Popular set; would be inspired by a necklace of KL, the trendy colors of the pearls in combination with genuine gemstones and locks make the necklace complete. Also regularly used for store actions and "give-aways"
Log in
Availability: In stock
SKU
678
Add to Compare
Necklaces with real gemstones is available to buy in increments of 100
Details

Karl Lagerfeld (born Karl Otto Lagerfeld, 10 September 1933) is a German fashion designer, artist, and photographer based in Paris. He is the head designer and creative director of the fashion house Chanel as well as the Italian house Fendi and his own label fashion house. Over the decades, he has collaborated on a variety of fashion and art-related projects. He is well recognized around the world for his trademark white hair, black glasses, and high starched collars.

Gemstones are rare rocks, which are usually processed and used in jewelery and decorative objects. Gemstones have the following characteristics: Beauty. This includes visual aspects such as color, luster, fire, transparency and lighting effects. Durability. Here we look at hardness, fragility / cleavage and chemical resistance. Rarity. Here we look at how often a product found in nature. Gemstones can be cut into many different shapes. The basic distinction is made between cabochon, wherein the gemstone is polished in a convex shape, and faceted, wherein the surface of the gemstone will be cut in different facets. When grinding one looks at various characteristics of the stone, including the color, color distribution, inclusions, special lighting effects, dispersion and broken and slijvlakken. They are processed into necklaces, earrings, bracelets and many other jewelry, but the gems are used in the industry to process. Known gems include diamond, ruby, emerald, sapphire, aquamarine, topaz, tourmaline, amethyst, citrine, carnelian, opal, onyx, turquoise, lapis lazuli and garnet. In the 18th and early 19th century it was fashionable to make jewelry that person's name or initials were processed. When choosing the gems were allowed to be guided by the first letter of the name of the gemstone, and so arose the gems alphabet. Were also made similar achrosticon jewelry during the nineteenth century in which sentiments were expressed in gemstones. Best known is the English 'regard' ring, an engagement ring where the word' regard '(reverence) was formed by the precious ruby (ruby), emerald (emerald), garnet (garnet), amethyst, diamond (diamond)