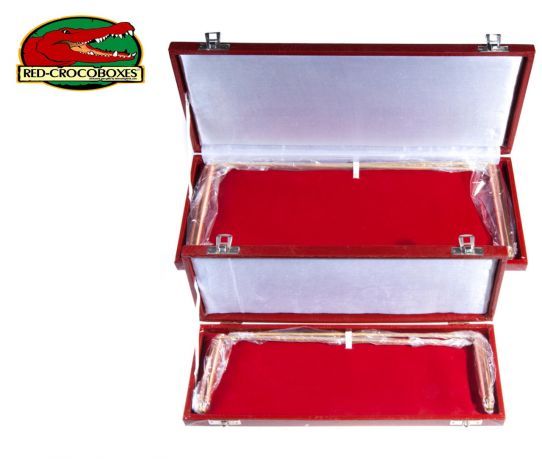 100% pure copper dowsing rods in large version. These sets we sell to 14 countries. It is packed in an especially nice leather-wrapped cassette and the quality of these pretty dowsing rods will make the success of this product.
Log in
Availability: In stock
SKU
1016
Add to Compare
Dowsing Rod large model luxury quilted red box is available to buy in increments of 1
Details

Dowsing rods is a form of divination used in attempts to detect the ground water, buried metals or ores, precious stones, oil, digging, and many other objects and materials in the ground, as well as so-called currents earth radiation (leylines), without the use of a scientific apparatus. Wichelroede is also known as a dowsing rod (especially with regard to the interpretation of the results), doodleworks bugging (particularly in the United States, in search for oil), or (when searching specifically for water) water finding, water witching or dowsing water. There is no scientific proof that dowsing is effective .AY - or L - shaped twig or rod, called a dowsing rod, dowsing (Latin: virgula divina or baculus divinatorius), a "vining rod" or witching rod is sometimes used during dowsing practice although some dowsers use other equipment or no equipment. Dowsing appears to have originated in the context of Renaissance magic in Germany, and it remains popular among believers in Forteana or radiësthesie dowsing as practiced today may have originated in Germany in the 15th century when it was used in attempts to find metals. Already in 1518 Martin Luther dowsing mentioned running as an act that broke the first commandment (ie, as occultism). The 1550 edition of Sebastian Münster Cosmographia includes woodcut of a dowser with a forked stick in his hand and a cutaway depiction of a mining operation by foot. The rod is called "virgula Divina - Rut Glück" (Latin: divine rod; German "Wünschelrute": fortune rod or stick), but there is no text in the woodcut. in 1556 was written by Georgius Agricola's about treatment and the mining and smelting of ore, De Re Metallica, including a detailed description of dowsing for metal ore Traditionally, the most common dowsing a forked (Y-shaped) branch of a tree or shrub. Some dowsers have preference for certain branches of trees, and some would prefer freshly cut branches. Hazel twigs in Europe and witch hazel are traditionally often chosen in the United States, but also are branches of willows and peach trees popular. The two ends of the bifurcated part held in each hand with the third (the stem of the "Y") pointing straight ahead. Often the branches are held with palms facing down. The dowser then walks slowly on where he thinks the target audience (eg minerals or water) can be, until the so-called dowsing dips, inclines or twitches show conceived as a discovery. This method is also known as "Willow Witching". Other equipment used for dowsing A garland of crystal, metal or other material hung from a chain is sometimes used in divination commute. In one approach, the user first determines which direction (left-right, up-down) shows "yes" and "no" before proceeding with the pendulum to ask specific questions, or otherwise may ask another person to ask the person which hold the pendulum. The sling can also be used on a board or cloth with "yes" and "no" written and perhaps other words written in a circle. The person performing the pendulum vassthoud aims to be kept as steady as possible over the center to movements and little results to provide answers to the questions. In the practice of radiästhesia a pendulum is used for medical diagnosis.


The Dowsing rod in practice.