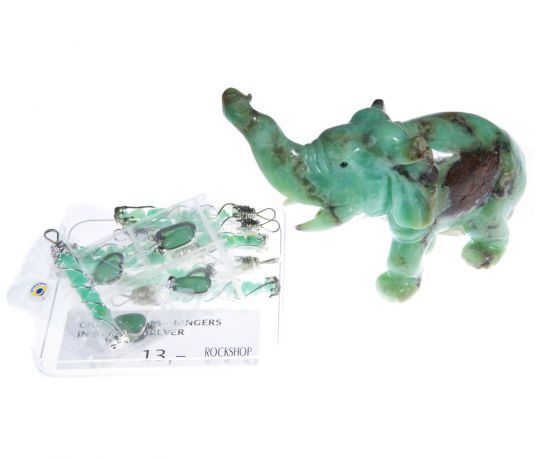 Chrysoprase from Queensland in Australia

Chrysoprase rough as polished elephants / kwanyins / snoff-bottles per gram only 1 - Personally, one of my three favorite stones.
Log in
Availability: In stock
SKU
886
Add to Compare
Chrysoprase from Queensland in Australia is available to buy in increments of 1
Details

Chrysoprase (Greek: chrysos, gold and prason, leek) is a variety of the mineral chalcedony, that shares the chemical, optical and physical properties. It may contain small amounts of nickel and has a color which can vary from apple green to deep green. Chrysoprase is often used as a gemstone. Chrysoprase is mined in Australia (Queensland and Western Australia), Germany, Poland, Russia, the United States (in the states of Arizona and California), and Brazil.

Precious and semi-precious stones have been used since recorded history and probably there for spiritual, emotional and physical healing. Alternative healers all over the world make use of gemstones today. It is best to use gemstones for physical healing with a professional, but prudence. Please refer to diseases, therefore, always a doctor. There is more between heaven and earth where we often can not explain the forces. Soon, you might come to the conclusion that it is about something mystical or extraterrestrial. Others do it as nonsense, bypassing an often very extensive experience and empirical knowledge. Gemstones may have a beneficial effect on human beings, and even a medicinal effect. To this end, they should be worn on the bare skin, for an extended period of time. Because the gem in constant contact with the body and rub over it with process does not include the effects of moisture, heat and acids, one can imagine that a recording is made of the mineral where the stone consists of. It is known that trace elements form an important part in the entire human metabolic process. Such small amounts that are absorbed through the skin would best to have a controlling influence, not only on a physical level but also on a spiritual and emotional level. Steen. It seems at first glance dead material, yet bursting with energy. The evidence is there, and some people swear that certain stones have healing powers. The idea that a stone as a kind of battery has stored energy, it is not surprising when you consider how they originated. Each stone is the result of different combinations of different substances, thousands to millions of years exposed to extreme temperatures and pressure differences. Often, in the deep interior of the earth. Our distant ancestors, who were much closer to nature, discovered the healing power of stones. To this day stones are used today to treat physical and psychological symptoms. We call this Litho therapy, derived from the Greek word stone. The many stones also have their own unique strength. And with that specific medicinal properties. That is, for example, depending on the composition, structure, color and hardness. This provides a certain vibration (energy) that is being broadcast. At Litho therapy, the stones are often placed at a point on the body where the complaint is. Or chakra and meridian points to release energy blockages. But you can also lay a stone in a room to clean it or to encourage certain atmosphere.