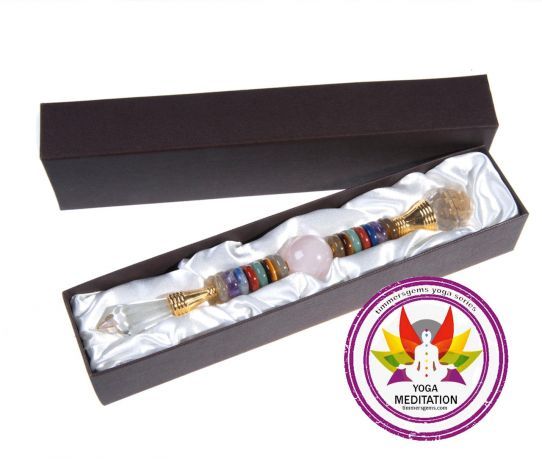 Luxury massage stick which has been designed by TG after a drawing of a Frenchman. Great tasteful design.
Log in
Availability: In stock
SKU
1008
Add to Compare
Chakra massage stick with genuine crystal feng shui ball. 165 mm. is available to buy in increments of 1
Details

Beautiful chakra pencil in 165x17 mm
Massage crayons be used as massage tools and by the shape and steensoorrt particularly suitable for practicing various massage techniques. Also for pressure point massages or treatments, these scions particularly suitable. The different types of gemstone whose slate pencils were made to their characteristics and operation to strengthen and deepen the massage.

Energy exchange between oil, gemstone and humans
Massage with gem stones bearing (trailers) is suitable for young and old, for every skin tone and creates a good flow. Stress is removed and new sparkling energy will take its place. Because of the heat of the gemstone, the massage penetrates deeper into the muscle, rendering it even more effective. This type of massage is very suitable for people with muscle problems, joint problems, tension or stress. The gemstone massage can be a stand alone treatment or take place in combination with another treatment.

Stone where you can massage them include rock crystal, amethyst, rose quartz, aventurine, orange calcite and carnelian. But actually every gemstone suitable depending on its typical characteristics. Gems can give you a lot of power when you are in a particular process or stage in your life. Think of the red jasper, which helps you stay on the ground with both feet (grounding) and supports digestion. Or rose quartz you a gentle, positive and loving experience working late. The stone of the heart. The effect of the gemstone massage is unloading and-Charging. It has a positive effect on the emotions and strengthen your self-image, self-esteem, love and joy.

We always like to refer to the link that opens when you following at the relevant page of the Gemstone Therapy Book and the Register of healing gemstones.

Seventh chakra Sahasrara (सहस्रार, sahasrÃ ¢ ra) Sahasrara situated above the hoofd.De Sahasrara (crown chakra) is related to spirituality and enlightenment. The seventh chakra is related to the pursuit of higher states of consciousness. An open seventh chakra causes a feeling of deep peace and harmony, beyond duality. This leads to experiences of total happiness and brings the connection to a reality that is beyond thinking. The energy of this chakra can lead to there that the Mahatma, "the great soul" reached..