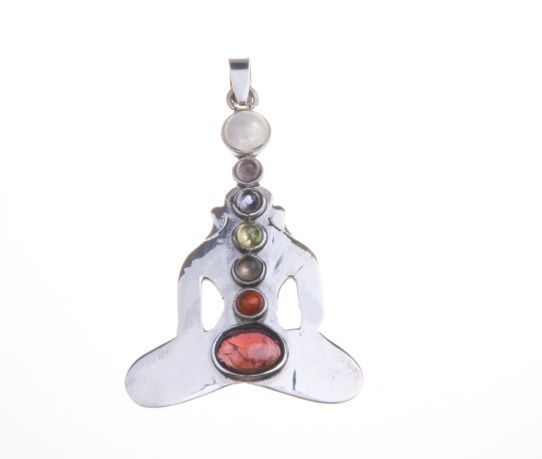 Our oldest pendant in the assemblage. For over 27 years we sell the exact same pendant, from the "Segue brothers from New Delhi .... that 140,000 pieces per year!
Log in
Availability: In stock
SKU
335
Add to Compare
925/000 silver pendant with the classic seven chakra stones is available to buy in increments of 1
Details

Seventh chakra Sahasrara (सहस्रार, sahasrÃ ¢ ra) Sahasrara situated above the hoofd.De Sahasrara (crown chakra) is related to spirituality and enlightenment. The seventh chakra is related to the pursuit of higher states of consciousness. An open seventh chakra causes a feeling of deep peace and harmony, beyond duality. This leads to experiences of total happiness and brings the connection to a reality that is beyond thinking. The energy of this chakra can lead to there that the Mahatma, "the great soul" reached.

Hematite necklace with various gemstones and silver balls
Log in