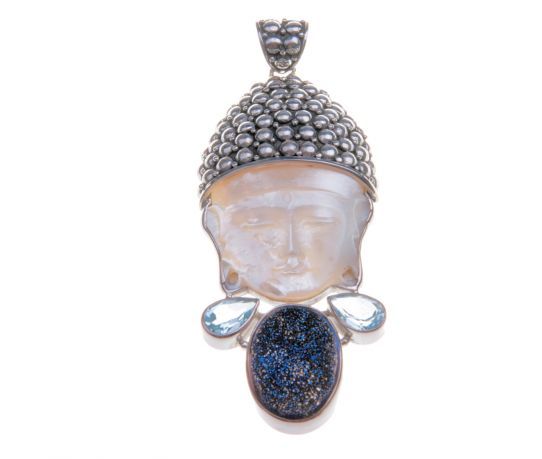 Bronze monkey with dish in beautiful colonial style. 50% OFF

Real masterpiece with exquisite quality inlaid stones! Comes from the Prestige studios in Yogyakarta
Log in
Availability: In stock
SKU
321
Add to Compare
925/000 silver pendant with Pearl head Aquamarines and Titanium aura is available to buy in increments of 1
Details

Mother of pearl is part of the shell of the mollusc. The material is used in many cultures utensils or art. Almost all of the shells comprise a number of superimposed layers, each with its own function, and of which the pearlescent layer is one of them. The thickness of the different layers varies per week group of animals. In most groups, the pearly layer one of the thinner layers the shell exists, some is low (almost) absent, there are also groups where the shell consists mainly of the nacre layer. The pearlescent layer is always located on the inside of the shell, where it is (as well as the rest of the shell) are secreted by epithelial cells of the mantle tissue of the animal. Apart from the provision of strength is the main purpose of smoothing of the inside of the shell. A second function is to defend the animals against parasites and harmful waste. When the animal by a parasite attacked or if it is irritated by an external object that can not eject the animal, what the process is in operation, and the object is included in successive layers of nacre. This process can continue without interruption until the shellfish late life. Usually, such an object is located between the animal and the shell. In such cases, the shell on the spot will only exhibit a thickening: the object is included in the shell itself. Less common is the subject is not on this site and will develop an entirely loose pearl. Pearlescent is made up of hexagonal platelets aragonite (calcium carbonate (CaCO3)) containing 10 to 20 microns wide and 0.5 microns thick. They are placed parallel in a continuous, thin layer. The layers are separated from each other by sheets of organic matrices which are composed of elastic biopolymers, such as chitin, lustrine and silk-like proteins. This mix makes the material strong and resilient, which is also due to the adhesion caused by the "masonry structure" of the pictures. This constantly recurring pattern greatly increases the hardness, whereby it can almost match to silicon. The iridescent appearance of mother of pearl is due to the fact that the thickness of the aragonite platelets is about 0.5 microns, which is comparable to the wavelength of visible light. This results in constructive and destructive interference of light at different wavelengths, so that the various colors of light to be reflected at different angles which looks at the mother of pearl.