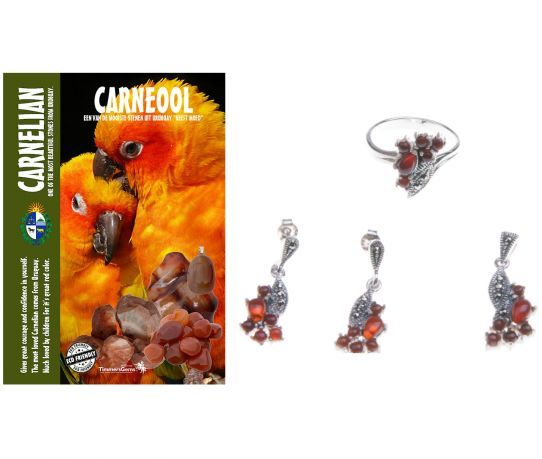 Tasteful set combined with finest quality Uruguay Carnelian.
Log in
Availability: In stock
SKU
340
Add to Compare
925/000 silver marcasite set with Carnelian. is available to buy in increments of 1
Details

The mineral marcasite or spear choose a pale yellow to source tinwit iron sulphide with the chemical formula FeS2. The name is derived from the Arabic word Makraschit, the original name for pyrite and similar minerals. Marcasite is rarely recognized as a gemstone, but in the Middle Ages especially popular in France, and was used as folk jewelry. Nowadays, especially in Thailand put small cut markasieten in silver. In prehistoric times it was used as a fire starter in combination with flint. Hydrothermal, postvulkanisch, not hyper and sediments. Marcasite has the same chemical formula as the cubic pyrite but a different crystal structure (orthorhombic). This called wordtisomorf. Marcasite is to the air quickly darkens and copies of this mineral can, over time even crumble or disintegrate. It is unimportant as iron or sulfur ore mineral. In the gems trade name marcasite is used improperly to cut pyrite. This "marcasite" with a brass-yellow color and a high gloss metal is mainly in silver jewelry put the entourage material. The name marcasite is Arabic or Moorish origins. It was used for all pyrietachtige minerals as marcasite, chalcopyrite, sphalerite and other. Marcasite hydrothermal is usually formed, and is found in sedimentary rocks (such as limestone, shale ofligniet), or in veins (with zinc and lead sulphide). The formation of marcasite occurs at low temperatures and under reducing conditions. It is found in the chalk deposits as at Cap Blanc-Nez near Calais, France. Sensitive to heat and sweat, fire comes into sulfur dioxide. The mineral to the surface corrodes

Edelshungiet packed in Organza bag with certificate.
Log in