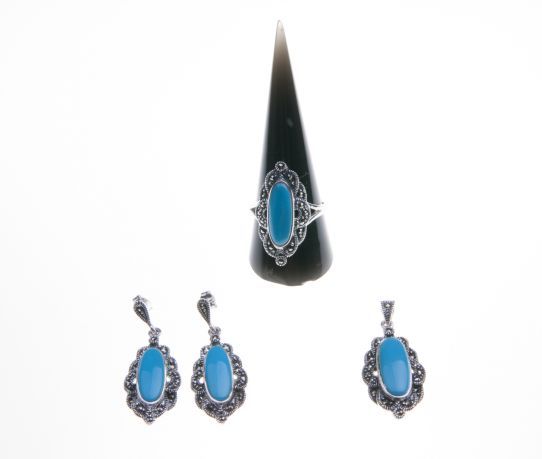 The mineral marcasite or spear choose a pale yellow to source tinwit iron sulphide with the chemical formula FeS2. The name is derived from the Arabic word Makraschit, the original name for pyrite and similar minerals. Marcasite is rarely recognized as a gemstone, but in the Middle Ages especially popular in France, and was used as folk jewelry. Nowadays, especially in Thailand put small cut markasieten in silver. In prehistoric times it was used as a fire starter in combination with flint. Hydrothermal, postvulkanisch, not hyper and sediments. Marcasite has the same chemical formula as the cubic pyrite but a different crystal structure (orthorhombic). This called wordtisomorf. Marcasite is to the air quickly darkens and copies of this mineral can, over time even crumble or disintegrate. It is unimportant as iron or sulfur ore mineral. In the gems trade name marcasite is used improperly to cut pyrite. This "marcasite" with a brass-yellow color and a high gloss metal is mainly in silver jewelry put the entourage material. The name marcasite is Arabic or Moorish origins. It was used for all pyrietachtige minerals as marcasite, chalcopyrite, sphalerite and other. Marcasite hydrothermal is usually formed, and is found in sedimentary rocks (such as limestone, shale ofligniet), or in veins (with zinc and lead sulphide). The formation of marcasite occurs at low temperatures and under reducing conditions. It is found in the chalk deposits as at Cap Blanc-Nez near Calais, France. Sensitive to heat and sweat, fire comes into sulfur dioxide. The mineral to the surface corrodes


Silver has been used for the beginning of our era decorations and cards. Excavations show that already 4000-3500 BC. silver was separated from lead on islands in the Aegean and Anatolia. Silver was often associated with the moon, the sea and various deities. The alchemy was used for silver symbol of a crescent and alchemists called Luna. Metal mercury was thought that it was some kind of silver. In some languages, there is still the name that mercury like quicksilver in English or mercury (meaning alive silver) in older Dutch. Much later turned out to be two completely different elements. The name Silver leads through the Old High German silbar of the Germanic root * seluƀra-. One suspects that it is a loan word that from Asia Minor or even further afield comes here. In Latin it is called Silver argentum, where silver symbol Ag owes. There are at least fourteen languages ​​in which the same word is used for silver and money. Well known examples are the Spanish and French plata argent. Until well into the 20th century coinage of silver and gold, the main payment of humanity. Today we see the use of silver only on commemorative coins and other collector coins and medals. Silver is a widely used material in the applied arts for the production of reliefs, busts, reliquaries, baptismal shells and other liturgical vessels, candlesticks, tobacco and snuff boxes, coffee pots, silverware and other ornamental and utensils. Sterling Silver (alloy with very high silver content) by goldsmiths is widely used for the manufacture of jewelry. Silver bracelets, necklaces and earrings are already known from antiquity. In the 18th century, silver shoe buckles in fashion. A charm bracelet is almost always made of silver. Silver is also used to redeem items made of inferior metals. Silver leaf, consisting of thin slices of silver, is used for decoration, for example in the painting (icons), or gold in the manufacture of leather. A special application of silver leaf is vark (or varakh), India in the popular use to decorate cakes with very thin layers of pure silver. For levels of very high quality silver is suitable because it possesses good light reflecting properties. But usually uses aluminum because it is much cheaper. The good electrical conductivity of silver makes it a very suitable material in electrical and electronic products. In circuits is silver (or silver alloy) used to connect components to each other. For longer connections silver too expensive. As a silver catalyst is used in the industry for example for the production of formaldehyde and ethylene oxide. In dentistry, silver is now no longer used because, while it is relatively easy to make the correct shape, but still has some toxic properties. Because of its disinfectant properties, silver is now also used again to purify drinking water or pure love. Especially for small quantities of water (up to 100 liters) is silver (as silver nitrate), easier to dose and apply than chlorine. In medicine, colloidal silver was once used as an antibiotic, alternative medicine, this happens still. In the laboratory lot of silver nitrate applied as a reagent in chloride provisions, including by precipitation. In addition, the insoluble silver chloride is formed. Silver is used as the silver halides in the photography. Finely atomised silver iodide is used to make rain and to reduce fog around airports. Namely, silver iodide allows for the aggregation of small water droplets which form the cloud. Silver is a metal that is easy to work a little harder than gold and has a white sheen. Silver has the best of all metal electrical conductivity and the lowest contact resistance, better than copper and gold. Gold, by contrast, used more often because it does not corrode. In addition, silver conductive of all metals heat the best and has the highest optical reflectivity (at least as far as the visible light, ultraviolet light reflects the bad). Silver halides are sensitive to light. The metal is stable in pure air and pure water, but when exposed to ozone or hydrogen sulfide discolors it. In the event that silver with sulfur or compounds thereof comes into contact a black layer is formed of silver sulphide.