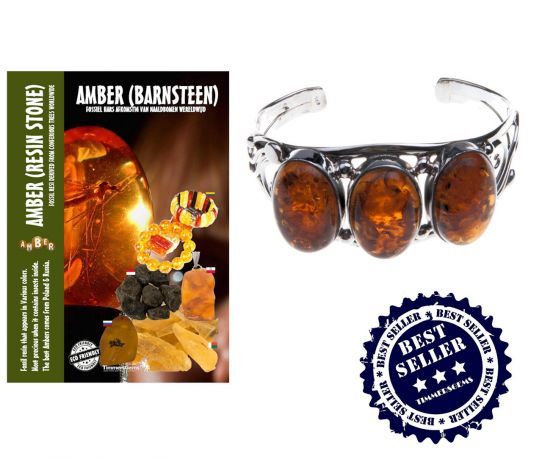 Beautiful piece of silverware with the finest Amber from Poland or Lithuania,
Log in
Availability: In stock
SKU
317
Add to Compare
925/000 amber bracelet comes from Gdansk in Poland is available to buy in increments of 1
Details

Succinic (incorrectly also called amber) is a fossil resin which is derived from coniferous trees. These trees were often referred to by the scientific name Pinus succinifera, a living pine species. The resin millions of years ago dripped from the trees and then petrified. Amber dating from the Mesozoic to the Quaternary. Amber is usually warm yellow to dark red in color, but there are more green, blue or even black types. Transparent amber is generally found the most beautiful and the most precious. Mineralogical seen succinic has an amorphous structure. It is quite soft, the hardness is 2-2.5. The word amber - in German Bernstein - comes from the Lower Saxon word that means Bornen burn. Indeed, this gemstone is flammable. Hot amber in English amber. In Dutch with amber usually meant the color amber. Also, a substance from the intestines of the sperm whale is called amber. This substance smells strong and is used in perfumes. The fact that many insects are found in amber also not escape the Romans. They stated this (correctly) by assuming that amber was liquid when it covered the insects. Therefore they called the stone Succinum or gum-stone. And the name still occurs in succinic acid (succinic acid), the scientific name for the pine species Pinus succinifera and also succinite, a name given by James Dwight Dana was given to a certain type of amber originating from the Baltic region. A general group of land snails are amber snails. They are so named because of the amber yellow color of the cochlea. The scientific name of a kind of amber snails reads Succinea putris. Amber is electrically charged by rubbing it along an animal fur. For this reason, the term electricity derived from the Greek word for amber, electron (Latin: electrum). In Greek mythology, the god Helios let one day his son Phaeton drive the solar car. But Phaeton could not rein in the horses, so the sun heaven and earth scorched. So were the people in Ethiopia their dark color. To save the earth Zeus throws his thunderbolt to Phaeton causing this death falls to the ground. The sisters of Phaeton, the Heliades, mourn him. Their tears trickle down and solidify into amber. The Greek mythological character Elektra is identified with amber. The Greek word for amber is "electron" (ηλεκτρον) from which our word "electricity" coming as a amber was up to the Greeks from the amber islands which one situated at the mouth of the legendary Amber River in the far north, the Eridanos.