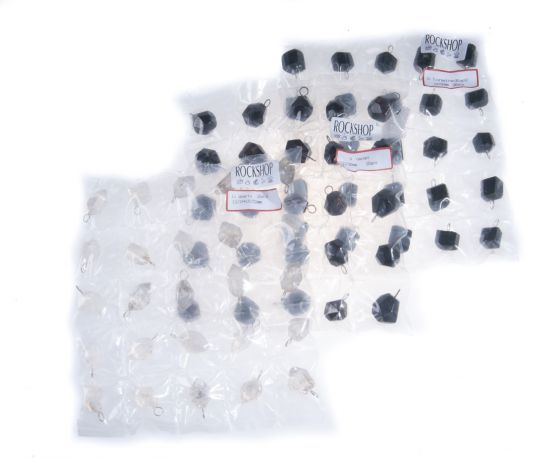 25 Tourmaline, 25 Garnets and 25 Rockcrystals total of 75 pieces at ridiculously low price. Very popular for those fond of separate crystal pendants.
Log in
Availability: In stock
SKU
1007
Add to Compare
75 Natural double terminated pendants is available to buy in increments of 75
Details

Double enders of rock crystal have clear points at both ends. Some stones are naturally formed, a double terminated distributes or absorbs energy simultaneously at both ends and channels her in two directions at once. A stone with a double ended integrates mind and matter and can form a bridge between two energy points. These crystals are useful in healing, because they absorb negative energy and break old patterns. You can also use them to integrate previously blocked parts of the self. If doubl Leinders be placed on the third eye, they can strengthen telepathy.

The garnet group comprises minerals of a cubic crystal system, and crystals in the form of rhombic dodecahedrons and trapezoëders. The nesosilicaten are of the general formula A3B2 (SiO4) 3. Shells may contain the chemical elements calcium, magnesium, aluminum, Iron2 +, + ijzer3, chromium, manganese and titanium. Grenades show no cleavage. The hardness is from 6.5 to 7.5, and shells can be transparent to opaque. The name "garnet" comes from the Latin word granatus, and refers to malum garanatum (pomegranate) is a plant with red seeds resembling found on many garnet crystals. Garnets are contrary to what is commonly believed, and the name suggests, is not always red, but may purple, red, orange, yellow, green, brown, black or colorless. In 1998 Bekily, Madagascar, for the first time found a blue-pink garnet. This variant is considered very rare. The six most common variants are pyrope, almandine, spessartiet, grossular, uvarovite and andra diet. These occur in two solid solution series: 1.De pyralspiet Group: pyrope-almandine-spessartiet 2.De ugrandiet group: uvarovite-grossular-andra diet. Grenades are very common in the lower crust and mantle, thus playing a major role in chemical understanding of the Earth. The grenade is one of the "nine gems" in Thai Order of the Nine Gems.