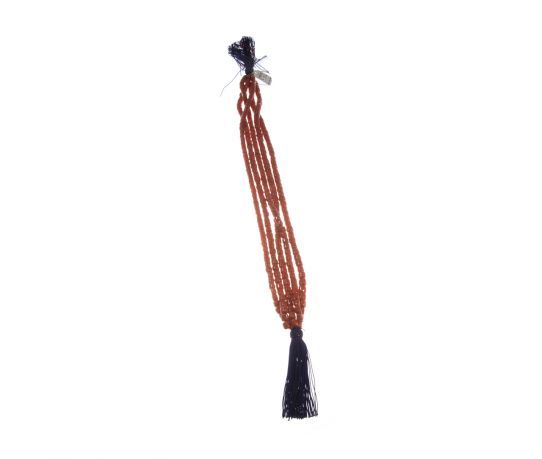 "Red Coral-cheese shapes" are still a popular form, but are often more porous than the balls / beads-necklaces. This is because the cheese are closer to the "root" of the coral.
Log in
Availability: In stock
SKU
467
Add to Compare
40 cm Red Coral strands 4-5 mm cheese shape / Mediterranean Italy is available to buy in increments of 1
Details
Blood or red coral is the common name given to Corallium rubrum and a number of related species of marine koraal.Het distinguishing feature of precious corals is their durable and intensely colored red or pink skeleton, which is used for the making of jewelery   Finding places: Red corals grow on a rocky seabed with low sedimentation, mostly in dark environments - either in the depths or in dark caves and gorges. The original species is C. rubrum (formerly Gorgonia nobilis), found mainly in the Mediterranean. It grows at a depth of 10 to 300 meters below sea level, although the shallower of these habitats have been largely depleted by harvesting. In the underwater caves of Alghero, Sardinia (the "Riviera del Corallo") it grows at a depth from -4 to -35 meters. The same species is also found in Atlantic locations near the Strait of Gibraltar and the Cape Verde Islands. Other Corallium species are native to the western Pacific, particularly around Japan (Corallium japonicum) and Taiwan, which occur at a depth of 350-1500 meters below sea level in areas with strong currents. Coral as a gemstone. The hard red coral skeleton of branches is naturally mat but can be polished to a glass-like luster. It shows a series of warm reddish pink color from light pink to dark red, the word coral is also used to describe such colors. Because of its intense and permanent color and gloss. Bloedkoraal has a relative density of 3.86 and a hardness of 3.5 on the Mohs scale. Because of its softness and opacity, coral is usually cabouchon shaped, or used to make beads.   Coral Trade. At the beginning of the 1st millennium, there was considerable trade in coral between the Mediterranean and India, where it was highly valued as a substance that was supposed to endow mysterious and sacred properties. Pliny the Elder notes that before the big question came from India, the Gauls used it to decorate their weapons and helmets. Under the Romans, were branches of coral hung around the necks of children to protect them from danger, and coral was attributed many medicinal virtues. The belief in coral's potency as a protector remained for a long time and even in the early 20th century in Italy, it was worn as a protection against the evil eye, and by women as a cure for infertility. Timmersgems buys since 1978. Corals are among the largest Coral Homes in Italy and since 2003 also in Taiwan!   Facts. 1.In Hindu astrology red coral is associated with the planet Mars or Graha - Mangala and used to vote favorably Mars. It must be worn on the ring finger. 2. A branch of red coral plays an important role in the social arm of the city of Alghero, Italy. 3. Used in Marken, Volendam and Middelburg as costume jewelery