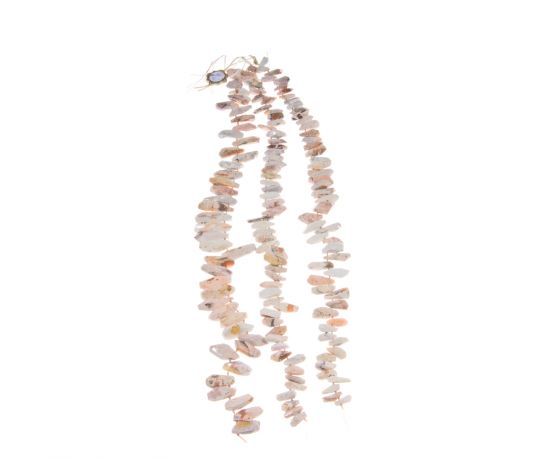 Really rare, "You say that a fire opal-faceted 'necklace can bought all over the world ?, well everyone will say that this is not possible? "But at TG it can indeed!
Log in
Availability: In stock
SKU
479
Add to Compare
40 cm fire opal necklace from Mexico is available to buy in increments of 1
Details

The mineraloid opal is an amorphous variety of quartz, SiO2 · nH2O, hydrated silicon dioxide with a water percentage of up to 20%. Opal can be colorless, white, milky blue, gray, red, yellow, green, brown and black. Often, many of these colors will be seen right away, caused by interference and diffraction of light passing by tiny, regularly arranged openings within the micro-structure of the opal, known as the Bragg grating. These openings are filled with secondary silica and form thin lamellae inside the opal during solidification. The term opalescence is used to describe this unique and beautiful phenomenon, although iridescence a better term would be. The opal is one of the minerals that are able to replace or fossils. The resulting fossils are saved by collectors. "Opal" is derived from the ancient Indian word Upala ", meaning gem. A distinction between the glistening edelopalen, the yellow and red vuuropalen ordinary opals. Their physical properties exhibit important differences. The opal is the official gemstone of South Australia. Opal has been used since ancient times treated as a gemstone. Initially it was used for the manufacture of primitive tools, and later for decorative objects. Opal has been used for the Assyrians, Babylonians and Romans. Edel Opal is one of the most mysterious stones. Traditionally it was considered a stone that brings misfortune, especially for people who are not properly cleansed the stone, the precious opal which Pliny described comes from the deposits of Dubník in Slovakia, which have been mined at that time. They wrote this stone to magical powers. He helped against melancholy, calmed the nerves, heal the heart, protected against worries, restored eyesight and gave the eyes shine again. In addition to naturally occurring opal, opal is produced in many different ways, experimental and commercial. The resulting material is to be distinguished from natural opal by its regularity; under magnification, the patches of color are seen in a "lizard skin" or "chicken wire" pattern are arranged. Synthetics are further distinguished from natural opal by the lack of the former to phosphorescence under UV light. In addition, synthetic opals are generally lower in density and are often highly porous; some may even stick to the tongue. Two notable producers of synthetic opal are the companies Kyocera and Inamori in Japan. The majority of so-called synthetic opals, however, be more correctly referred to as imitation, since they contain substances that are not found in natural opal (eg, plastic stabilizers). The Gilson opals often seen in vintage jewelery are actually imitation consisting of laminated glass with bits of foil interspersed.


Searching for opal in the mines.