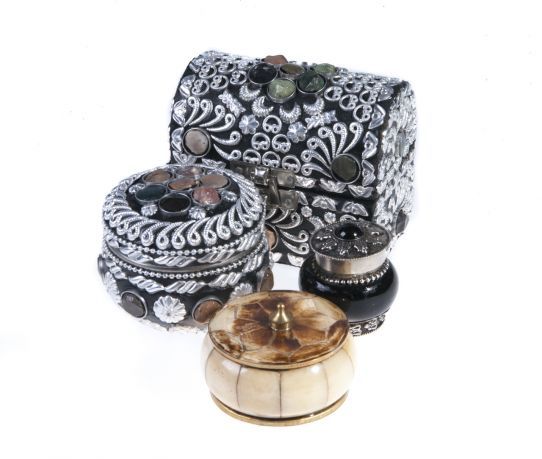 Did you know that there are many "box collectors".? Boxes made from natural material are always good selling items.
Log in
Availability: In stock
SKU
994
Add to Compare
Stone and / or Fossil Mammoth Legs Boxes is available to buy in increments of 1
Details

Fossils mean all residues and traces of plants and animals preserved in rock. Although it is often thought, fossils do not 'petrified' to be. Many fossils are not really petrified. Even in very ancient rocks are fossil remains that have changed little known. Furthermore, many think that fossils always very old. Also, this is not right. There are many very young fossils known to occur in people known periods. The science of fossils is called paleontology. This area of ​​knowledge helps to study the sequence of rocks, a branch of geology which is called biostratigraphy. Because vestiges of life only fossilize under specific circumstances, the fossil information limited by definition "incomplete". When word one often thinks of fossil bones of dinosaurs and mammoths and it is true that the hard parts of an organism at highest risk by fossilisation to be preserved. For vertebrates be that the bones and particularly the teeth. The softer tissues of the organism remain stored only in special cases and are therefore much rarer. Softer fabrics are retained only if they quickly buried under a layer that shields them against any form of decay or damage. With only the hard parts, it is sometimes difficult to form a clear picture of the entire organism. A good example is the conodont, which have long been found in large numbers, but only from their teeth were known. Only when there was also found a printout of the remainder of such an animal, found that it was in fact a primitive form of the stem Chordata. In other animal groups are often other hard parts, such as fossilized shells. There are a number of special forms of fossilisation. In amber example, sometimes entire bugs found trapped, because the resin from which the amber was born, is a good barrier against oxidation. This is true on a larger scale also for tar pits. Near the US city of Los Angeles is a good example in the La Brea tar pits. From animals that were trapped in the tar pit, the bones were often well preserved. Moreover, the trapped animals are often attracted to predators, which also became entangled. In this way, during the Pleistocene formed a "graveyard bones." In clays are often found well-preserved fossils are deposited in stagnant anoxic water. The absence of oxygen fossilize plants it particularly well. Very often it is not the whole water column oxygen but only the lower part. Such layered water thus has a normal oxygen content in the upper layer. In the upper layer will kill organisms which then sink down and then end up in an oxygen-free environment where they are kept. Also living organisms can end up inadvertently in the bottom anoxic layer causing it to die and fossilize. In such a deposition fish are sometimes kept in a cramped manner suggesting suffocation. A well-known rock with such fossils is the "Kupferschiefer 'from the Rotliegend in central Germany. Next to remnants of organisms themselves are derived are also tracks that have been considered active or passive by organisms to the fossils. They include coprolites (fossilized feces), and trace fossils, such as footprints and digging corridors. Of trace fossils, it is not always possible to determine from which animal they come from. They therefore often have their own taxonomic designation.