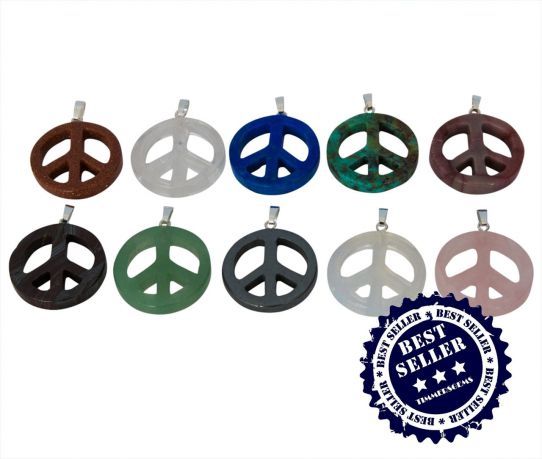 The peace symbol in gemstone
The peace symbol is a stabbing in 1958, was designed by the British designer and artist Gerald Holtom . He did this at the request of the peace movement , which campaigned for disarmament of nuclear weapons . The symbol is derived from the " Semaphore Flag Signaling System " . The vertical line is "D" for " Disarmament " ( = disarmament ) and the two slashes to both sides "N " for " Nuclear " ( = nuclear) , " U" for " Unilateral " ( = one-sided ) . The sign stylized by Holtom and has been designed , however, much older , the symbol of the circle is the inverted Algiz rune . Algiz is by many for life , the inverted Algiz death. In modern times , this Yr rune used as a death rune . When Nazis and was the Yr rune as an alternative to the Christian cross . The peace stabbing was "taken " from the broken, upside-down cross in the time of the Roman emperor Nero was a symbol of the persecution of Christians . Is there any reason to believe that the same symbol must always mean the same thing and that there is a significant correlation between the death rune , peace symbol and the symbol of the persecution of Christians. At Timmersgems we have many sorts of peace signs in gemstone like: Amethyst, Rose Quartz, Rock Crystal, Jade, Tiger iron etc. etc.