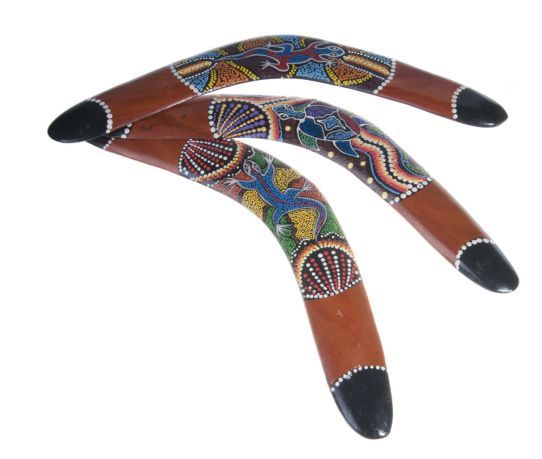 Quartz sphere with clock also makes it possible to see from wich direction the wind is blowing.

For those who like Australia has something to do with the Aboriginal art. All boomerangs has been made with the so-called. "Dot-relief stamp" technique.
Log in
Availability: In stock
SKU
852
Add to Compare
Original wooden Boomerang from southern Australia. is available to buy in increments of 1
Details

A boomerang is a bent object, usually made of wood, it has the profile of an aircraft wing, and can come back after the cast again. The best known form is the boomerang as a flat curved piece of wood (two wings), but there are also boomerangs with three or more wings, and even one wing is possible if the base is increased. It is sometimes thought that a boomerang was used for hunting. That's probably not true. He was used as a singularity, or to impress other tribes. He is best known for the aboriginals in Australia, but also boomerangs have been found in Europe and Egypt. In the Netherlands, boomerangs were found in Vlaardingen and Velsen from the first century BC. Australian boomerangs were mostly throwing wood. A casting timber (also called hunting wood) go straight ahead and did not return. This involves rapidly and quickly turns around, so that it is suitable to touch with small animals such as birds. Prehistoric cave paintings have shown that certain tribes used the boomerang in a traditional dance to 'catch' the air spirits. These were necessary to bring certain rituals reflected, which were used in natural (nude) form. In general, a boomerang light weight, and is not dangerous. But he can also be quite heavy, and come back with a good speed. The solution to this is to never lose sight of him, and if necessary to take a step aside. A boomerang may be left-handed or right-handed. When a right-handed boomerang is thrown away as a southpaw, he goes straight. When a boomerang is thrown well, he will be the first piece to go straight, but will then return via a circular orbit. It is possible that he is going the other way round then make a smaller circular path, and thus makes an eight-figure. The pitcher must take into consideration the wind; in general, it is only possible to leave a boomerang good return when one throws in at a certain angle against the wind, with a certain force, a certain rotational speed, a certain angle with respect to the ground, and a particular riser angle of the web. This can only be learned by practicing a lot and properties of all boomerangs differ in these respects again what. Learning to recognize / predict the flight is an important aspect of pitching well. This allows the pitcher can somewhat predict where the landing will be. If necessary (and possible) the pitcher can go running to be ready for the catch. The amount of wind is a strong determinant for a good pitch. The easiest way to throwing in little or no wind. With more wind is, by adjusting the pitch, are also thrown. Small errors in the throwing technique, however, then serious consequences. Above wind force 3 is not advisable to throw yet. If you do, you can throw unsightly wounds on hold.