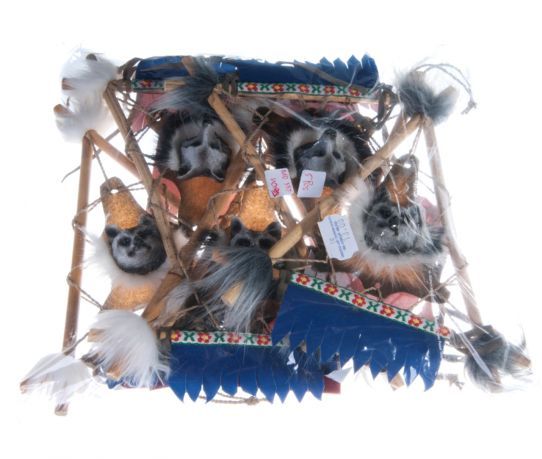 In addition to commercial dreamcatchers, we have made over about 20 pieces, really made by individual Native Indians, Made with Turquoise, Rockcrystal and Obsidian.
Log in
Availability: In stock
SKU
667
Add to Compare
Native Indian dreamcatcher with "beautiful wolf" is available to buy in increments of 1
Details

A dream catcher is a traditional object, originally from the Ojibwe (Anishinaabeg), an indigenous people of North America. Because of the spiritual or esoteric associations this object is late 20th century also came into use among followers of New Age philosophy. A dream catcher consists of a ring (usually made of willow wood) with a web therein. Often there are beads or stones in the web and hang feathers under the ring. The Ojibwe believe that making it yourself and hang a dream catcher above the bed wards off bad dreams. For centuries parents make dream catchers to hang above the bed or carrycot of their children. It is thought that the sky is soaked with dreams, good dreams, but also bad dreams. During the night, the bad dreams caught in the web and according to tradition, they then glide into the morning off and drying them in the morning. Good dreams can find their unhindered passage in the center of the dream catcher and act so life within the dreamer.