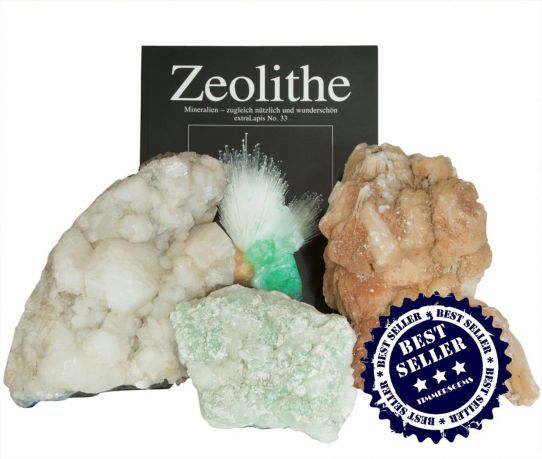 20 kilo of Zeolites from India

Since 1978 TG maintains close ties with several Indian regions such as Bangelore for incense, Delhi for the pendulums and bronze and Pune for minerals / Zeolites & Lingams. Every year we import 20,000 kilo Zeolites and Lingams.
Log in
Availability: In stock
SKU
1246
Add to Compare
20 kilo of Zeolites from India is available to buy in increments of 1
Details

Zeolites are microporous, aluminosilicate minerals commonly used as commercial adsorbents and catalysts The term zeolite was originally coined in 1756 by Swedish mineralogist Axel Fredrik Cronstedt, who observed that upon rapidly heating the material stilbite, it produced large amounts of steam from water that had been adsorbed by the material. Based on this, he called the material zeolite, from the Greek ζέω (zéō), meaning "to boil" and λίθος (líthos), meaning "stone". Zeolites occur naturally but are also produced industrially on a large scale. As of July 2015, 229 unique zeolite frameworks have been identified, and over 40 naturally occurring zeolite frameworks are known Zeolites have a porous structure that can accommodate a wide variety of cations, such as Na+, K+, Ca2+, Mg2+ and others. These positive ions are rather loosely held and can readily be exchanged for others in a contact solution. Some of the more common mineral zeolites are analcime, chabazite, clinoptilolite, heulandite, natrolite, phillipsite, and stilbite. An example mineral formula is: Na2Al2Si3O10·2H2O, the formula for natrolite. Natural zeolites form where volcanic rocks and ash layers react with alkaline groundwater. Zeolites also crystallize in post-depositional environments over periods ranging from thousands to millions of years in shallow marine basins. Naturally occurring zeolites are rarely pure and are contaminated to varying degrees by other minerals, metals, quartz, or other zeolites. For this reason, naturally occurring zeolites are excluded from many important commercial applications where uniformity and purity are essential. Zeolites are the aluminosilicate members of the family of microporous solids known as "molecular sieves." The term molecular sieve refers to a particular property of these materials, i.e., the ability to selectively sort molecules based primarily on a size exclusion process. This is due to a very regular pore structure of molecular dimensions. The maximum size of the molecular or ionic species that can enter the pores of a zeolite is controlled by the dimensions of the channels. These are conventionally defined by the ring size of the aperture, where, for example, the term "8-ring" refers to a closed loop that is built from eight tetrahedrally coordinated silicon (or aluminium) atoms and 8 oxygen atoms. These rings are not always perfectly symmetrical due to a variety of effects, including strain induced by the bonding between units that are needed to produce the overall structure, or coordination of some of the oxygen atoms of the rings to cations within the structure. Therefore, the pores in many zeolites are not cylindrical.