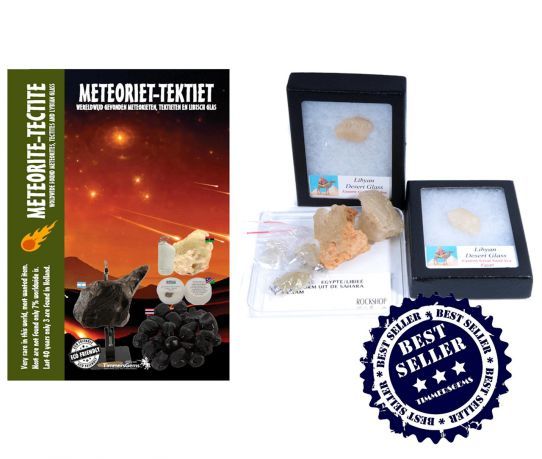 Is found in the Sahara desert on the border with Libya and Egypt. Is unaccompanied a very dangerous area.
Log in
Availability: In stock
SKU
1152
Add to Compare
Libyan Sahara Libya glass (type of tektites) is available to buy in increments of 10
Details

Tectites are pieces of glass of earthly origin, and are named after the Greek word tektos which means molten. Libyan glass in Libya and Egypt, these are pale yellow to yellowish green and weigh up to 5 kilograms, and are suitable for facetting.

Because tectites are likely to occur during meteorite deposits, the occurrences are often limited to relatively small areas, called stray fields. The best known tectites come from the Czech Republic, where they are found in the area of ​​Vltava, so they are called moldavites and they were discovered in 1788. In Bohemia and Moravia, numerous places have been found. In appearance, they distinguish themselves by their shape, color, size and surface. One suspects that there is a connection with a meteorite crater, the Nördlinger Ries in Germany. The age of this crater is dated at 14.8 Ma. The tectites weigh from about 8 grams to 110 grams. Other sites include Besednice, Lodenice, Habri, Kamenny, Újezd ​​and Slavče. Moldavites are located in the sediments of the Upper Mioceen, but also in younger settlements. In Moravia, Moldavites are darker, less transparent and have a smoother surface, however, they are larger and can weigh up to 260 grams. The most famous Moravian sites are Kajotice, Slavice, Stepanovice, Mohelno and Dukovany. Moldavites are sometimes also found in Germany at Dresden and in Austria. Other tits are dark brown to black. The names depend on the locations: Indochinites occur in Vietnam, Cambodia and Laos, (Indochina), they are black-green and have a smoother surface and weigh up to 3 kilograms. Philippon or Rizalite, in the Philippines. Billitonites on the Malaysian Peninsula and on the islands of Banak, Billiton and Sumatra. Javaite on Java, these stones are black. Irgizite in Kazakhstan. Australia in Australia. Darwinglas, on the island of Tasmania, which is lighter and suitable for facial slim. Black Bediasite occurs on the American continent, mainly in the United States, and in Texas. Dark green Georgian in Georgia, Peru and Colombia.