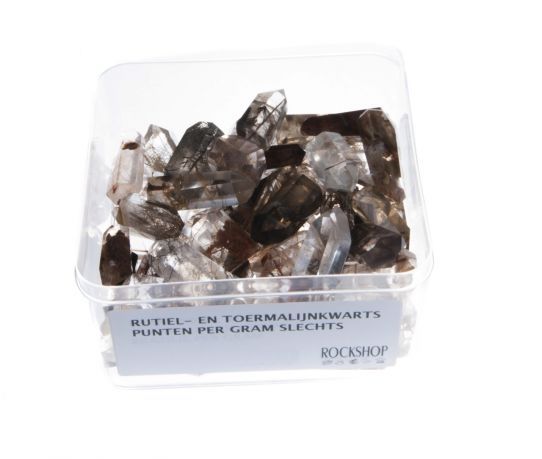 Rutilated and / or Tourmaline Quartz points from Brazil.

Nice & small and therefore still affordable points Tourmaline- & Rutilated Quartz is hard to find. Because Chinese people are fond of this stone and buy everything at astronomical high prices!
Log in
Availability: In stock
SKU
900
Add to Compare
Rutilated and / or Tourmaline Quartz points from Brazil. is available to buy in increments of 20
Details

Rutilated quartz is a quartz variety. The color varies from white transparent rock crystal to dark gray or dark brown smoky quartz filled with silver, gold or red to reddish rutielnaaldjes. Chemical composition: SiO2 + TiO2 (rutile) + Fe, Sn, V, Cr, Nb, Ta + (Na, K, Cl, C) Crystal system: the quartz is trigonal, tetragonal is the rutile. Crystal Class: oxides. Fission: Unclear. Color: dark to very light, translucent pink. Stripe color: white. Shine: glass gloss Break: raw, shell-shaped. Hardness (Mohs): 7. Average density 2.68 - 2.72. Transparency: transparent to translucent. A common mineral. Sites are in Switzerland, among others, Brazil, Madagascar, USA and Australia. The rutielnaaldjes were given to her by Venus, which gave the nickname Maidenhair crystal quartz-saga or not. This would be a powerful love charm. Later it was thought that angels hair was in this mineral and it was named angel-hair quartz. Rutielkwarts associated with the constellations Leo and Aries.