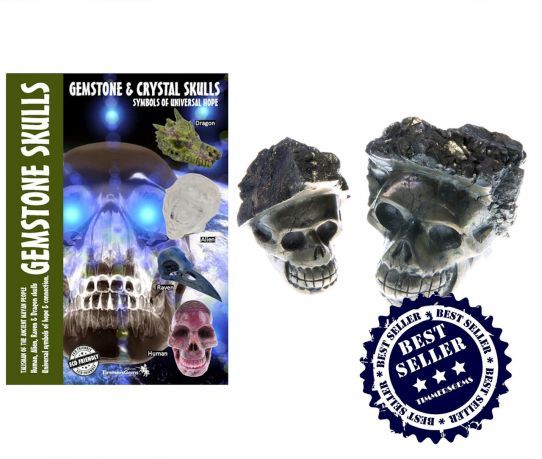 Only 1x seen and then also purchased immediately. A top seller it's not, while still very - very special.
Log in
Availability: In stock
SKU
783
Add to Compare
Pyrite skulls from Peru. Very rare. is available to buy in increments of 1
Details

Pyrite or iron pyrites is a mineral with the formula FeS2 (chemical name: iron disulfide). It is an important mineral iron ore and sulfur. It is often well-formed (euhedrische) of crystals in the form of a cube with characteristic striations and with a gold sheen. It is also called mad tinsel or gold (gold of the English fool's) because it sometimes for gold as was. However, the name cat gold is sometimes used incorrectly, this refers to yellow mica or resin. Because pyrite occurs largely can create the illusion of great wealth. However, pyrite is not worth very much (although it can be sold). It is found, together with other sulfur-containing minerals, but also with oxides, in quartz veins in sedimentary rocks in the carbon beds and as a replacement mineral in fossils. Pyrite is a disulfide with sulfur pairs (S2) 2, and Fe2 + ions in an octahedral surrounding t2g6 went into a low spin state. As a result of the fact that both ions have a closed configuration, it is a diamagnetic semiconductor. When the weathering of pyrite occur iron (hydr) oxides, which also releases sulfuric acid. This acid may then enter into reaction with other minerals, and thereby lead to the formation of, for example, gypsum, and aluniet jarosite. An important source of pyrite is the island of Elba. The name pyrite is very old, derived from the ancient Indo-European word pyr (fire, cf. Eg pyrotechnics fireworks art, or the English pyre (pyre) because one could create sparks by pyrite against flint or iron to catch on. Today The day we hear something different under flint (a form of SiO2). Other names that one of pyrite against can get his ferrosulfide, sulfur, iron and less common words ijzerblende and iron pyrites. Pyrite was used to be sold adulterated gold since the gold-like shine . However, the gloss changes when the glossiness flat tilts, with gold the gold shimmer is the same. Also, pyrite angular, with sharp edges and hard, while gold is round and soft.