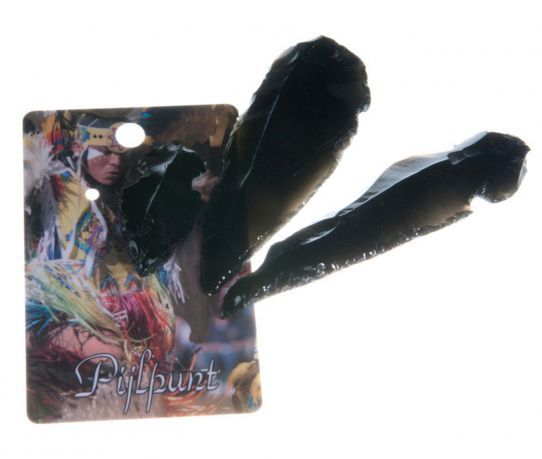 Large XXL arrowheads mixed delivered in Obsidian black and / or flint. Both used for centuries as an arrowhead.
Log in
Availability: In stock
SKU
630
Add to Compare
Original hand beaten arrowhead Obsidian XXL to 5 cm. is available to buy in increments of 1
Details

An arrow is usually part of a bow and arrow being shot away, but there are weddings and special types of blowpipes and more varieties, see other arrows. Arrows are made in the course of the centuries in many forms and from different materials. For the construction were clamp connections, glue or thin binder material used, whether or not in combination. As the shooter had an interest in the performance equal of all his arrows, it required making arrows attention to detail. The arrow is put on the bow, consists of three main parts: point, shaft and feathering. Ancient arrows are almost exclusively found the points, because they were often made of durable material. Stable flight, the point are weighted to bring the center of gravity forward, and for use as a weapon, the point must be sharp and hard. For shape and size must always be a compromise between the aerodynamic properties of the point and the need to take lethal purpose or cause serious injury. In prehistoric times were arrowheads from flint or obsidian made. Both have the advantage of being readily form sharp edges: flint were repulsed sharp fragments with a sharp tool, obsidian has naturally sharp edges by its crystal lattice. Furthermore, also used bone splinters or thorns of plants, or was simply the arrow shaft cut sharply. In later times it was used bronze and iron; by forging and casting metals could be more accurately formed than stone, and were easier to make in large quantities. For greater effect, the arrow head has sometimes been dipped in arrow poison or provided with barbs.