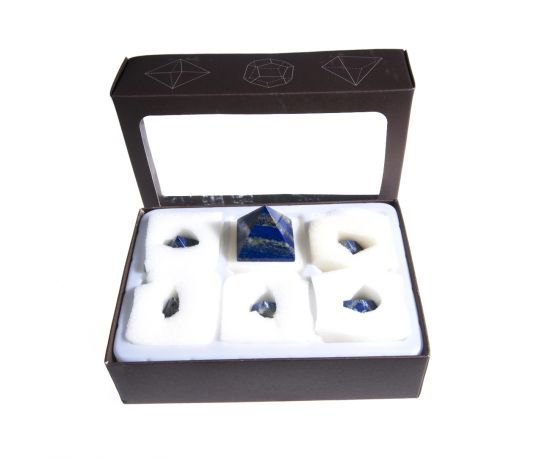 Perfect cut Pyramids to the dimensions of the Egyptian pyramid of Cheops!
Log in
SKU
447
Details

Lapis lazuli is an opaque gemstone with an intense azure color. It is not a mineral, but a rock, because it consists of more than one component. It is mainly produced in Afghanistan. The main component of lapis lazuli is lazurite (25% to 40%), a veldspaatvervanger having the chemical formula (Na, Ca) 8 (AlSiO4) 6 (S, SO4, Cl) 1-2 [1]. Other important components are : calcite (white), sodalite (blue) and pyrite (yellow - metallic gloss). Further, also the minerals augite, diopside, enstatite, mica, hauynite, hornblende, geyeriet (sulfur rich variety of lollingiet) and prevent noseaan in lapis lazuli. Lapis lazuli for a gemstone is not particularly hard. On Mohs scale, the hardness is 5.5, which means that the stone can be easily scratched by harder gems. It is therefore not sensible jewelry with lapis lazuli store with harder gemstones. Lapis lazuli is awarded spiritual power by alternative practitioners. Lapis lazuli usually occurs through contact metamorphosis in crystalline marble. Lapis lazuli was already known since ancient times. It was in the city of Ur as early as 4000 BC. in acting. It was one of the commercial products of the trade between Sumer, Dilmun and Meluhha. It was also very popular in ancient Egypt. It was used, for example, the death mask of Tutankhamun. There was in the entire Middle East so much in demand that there are already in the 13th century BC. imitations were manufactured. From the city Sidon cylinder seals are known, for example, of King Annipi and his father Adummu which have been given a dark blue color with the aid of cobalt salts. They used lapis lazuli also in ground form as a blue dye (ultramarine), also in the painting of the Renaissance was very popular.