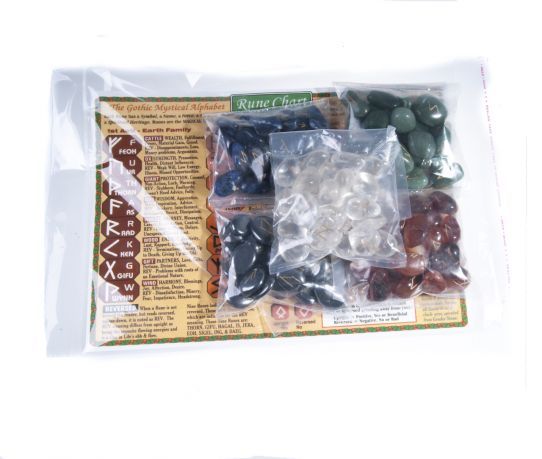 "Not painted", "No sticky stickers" but really "laser engraved" and then colored. Various types of stone, very popular.
Log in
Availability: In stock
SKU
1006
Add to Compare
Gemstones with "Runic characters" Laser engraved runes is available to buy in increments of 1
Details

The runic script (in short runes) is the oldest known script used by the Germanic peoples of northern Europe, Great Britain, Scandinavia and Iceland from about the 3rd century to the 16th or 17th century. It consists of letters usually composed of straight and angular lines that are easy in, for example, stone or wood may be scratched. When used on metal were used also round shapes. The application was at the time of rune also called "zippers". Futhark is the name of several Old Germanic runic alphabets. The term for the scientific study of runic alphabets, runic inscriptions and their history, is runology skill or rune. Runic inscriptions are known from about 150 to 1200 AD. and in Scandinavia for a few centuries longer. In Dalekarlië (Sweden) were farmers at the end of the eighteenth century yet familiar with runes. After 800 AD. lost the script on the European continent gradually competing with the Latin alphabet was taught in schools. The script was used for all kinds of messages, but is best known for the rune stones that serve as memorials. In almost all areas where Germanic peoples (including the Vikings) have been, runic inscriptions can be found. Particularly in Scandinavia to see his runic inscriptions. Many inscriptions are on rune stones memorial stones were erected along major trade routes. The Einangstein when Slidrefjord in Norway is the oldest known runic inscription which still stands on its original site. The stone is in the vicinity of mounds and remnants of bog iron mining. The two Jelling stones are probably the most famous stones. Can be found in the vicinity of Schleswig, near the old Haithabu, five rune stones. These are reconstructions of the original stones are located in the museum of the city.

Predicting with runes. The historical use of runes to gain insight into the future is one of the worst documented prediction methods, the lack of evidence scientists assume that there is no rune was gedivineerd in antiquity. However, the modern application is a completely western method that is similar to the oriental I Ching and the tarot. When throwing runes is the significance of the stones and their position relative to a question asked at that time. In that sense, the premise of the same changes that are adopted by other prediction methods, namely that there is something like a synchronicity between what is required and the image that gives the prediction. Whether it be maps, the location of the planets or rune stones, each time there is a belief or assumption that there is a meaningful connection and simultaneity between the question and the answer given by the prediction method. One of the many modern methods to predict with runes is the following: When predicting be 25 rune stones and throwing a mat used runes. Twenty-four of these stones have a rune sign, one of them is blank. A mat is manufactured from paper or any other material of choice. Thereupon than three concentric circles drawn or sewn. As a guideline it is recommended that for those circles diameters of 7.5 and 17.8, and 25.4 cm to be used, this in relation to the dimensions of the stones. These three concentric circles deliver four areas: the inner circle, the center circle, the outer circle and the space beyond. The middle circle is called "skjebne" - the Norse word for "fate" - the middle circle is called "outside skjebne" and the outer circle is divided into four segments that where different meanings are attributed. The interpretation of the position of the rune stones various alternative methods are possible:

1.Some the segments indicate the 'health', 'domestic situation', 'wealth' and 'success'
2.Even it is customary to assign to these four segments, the elements of Earth, Air, Fire and Water. This alchemy symbolism is used.
3. Another possibility to predict with runes, the granting of astrological symbolism of the stone and their plunged position on the mat.
4.De most traditional method is a simple system whereby the segments named "feoh ',' Bîrcă ',' Ing 'and' Lagu 'gain. These blocks receive according to their "landing" a special meaning. In total there are seven possible areas where rocks can fall into: the four segments Skjebne outside Skjebne and the place outside the rune circles.