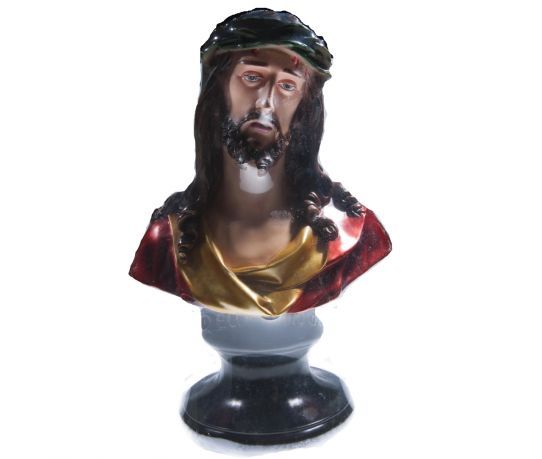 Great beautiful expression. Made of plastic and completely hand painted.
Log in
Availability: In stock
SKU
206
Add to Compare
Bust Jesus small size (about 10-12 cm high) is available to buy in increments of 1
Details

Catholic churches have always been very visual and sensory.

The religious images are part of this setup. It helps keep the mind sharp by watching religious objects and statues in the church that can be viewed during the service. It is a similar idea as having stained glass windows in a church with one depicting religious scenes and saints. It helps the congregation and makes one feel they are surrounded by the spiritual.

Catholics also ask the Virgin Mary and the saints to intercede and pray for them.

So you see very often these statues of saints, where you can direct to your thoughts, prayers and requests. Art is a way of expression to bring out an inner feeling - to honor and conscience to glorify God. During the first 1600 years of Christianity, most people could not read or write. Each stained glass window and statue in medieval churches told a story. Illiterate people could watch the stained glass images on the windows of the church and understand what the story was about. So not only were the images and paintings beautiful and reverent, but they were also very functional. They told the biblical story and the priest would be able to point to the objects in his sermons. Sculptures and stained glass were for the priests, teaching materials, tools and memories. When we walk through a classic sanctuary and we see the statues, then every saint his story. An educated Christian could learn the stories of all those saints and they tell again to his children, even if he could not read. This also explains the traditional classification of the windows: a large central image surrounded by a large number of smaller ones. With proper explanation, one could learn the whole story quickly, say John the Baptist, along with all important aspects of the life of Christ. These were not false images to be worshiped, but memories of the story of salvation.

According to Christian doctrine, Jesus is the only begotten Son of God and the God of the Old Testament (Tanach), through the prophets promised Messiah (eg Isaiah 53: 3 and below), the "anointed" by God, which man freed from their sins and the harmony between God and man, which was broken due to the fall of the first people in paradise recovers. According to the Bible, Jesus was born to save the people from their sins. As explained in the Gospels made his death reconciliation with God the Father possible, because he is the penalty for the sins of mankind upon himself: Jesus is "the Lamb of God who takes away the sins of the world." The idea that Jesus and his crucifixion reconciles man with God is described as atonement. The Abrahamic principle of "justification by faith" thus acquired a new meaning: everyone who follows Jesus will be justified before God (rehabilitated). Central to the theology of Christianity: the birth of in the New Testament Jesus (Christmas), his death on the cross (Good Friday), the raising of the dead (Easter), the Ascension (Ascension), the descent of the Holy Spirit upon the disciples (Pentecost) and the return (the Second Coming). In the Christian tradition has always been little focus on the actions of Jesus during his life and teachings that Jesus proclaimed, despite that a significant proportion of the relevant Bible books here will override. The resurrection from the dead is taken literally by most Christians. This event in Christianity occupies a crucial place, because for them the final victory of the dead, and with an open future, expresses. Even Paul in his first letter to the Corinthians the resurrection of Jesus literally the focal point in the gospel.