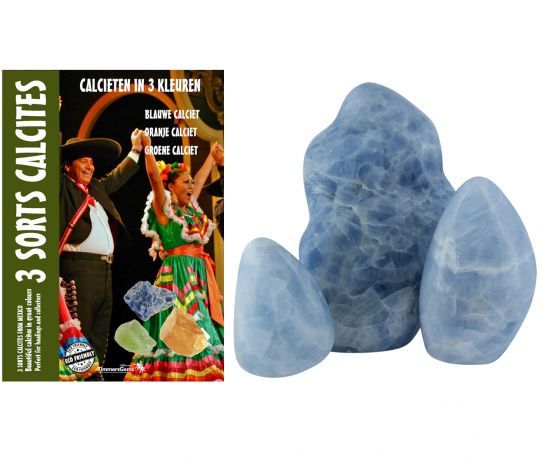 Beautiful blue calcite which has a fantastic color. Originating from the mineral and gemstone paradise Madagascar.
Log in
Availability: In stock
SKU
636
Add to Compare
Blue Calcite sculptures from Madagascar Bombetoka is available to buy in increments of 5
Details
The mineral calcite (also known as calcite) consists mainly of the salt is calcium carbonate (CaCO3), and is one of the most common mineral in the earth's crust. Calcium carbonate is caused by soluble calcium ions come in contact with CO2 (carbon dioxide forms a carbonate ion as a positive ion is in a solution). Calcium carbonate is a poorly soluble salt, which makes the formed CaCO3 precipitates; this is going according to the following reaction: Ca2 + (aq) + CO32- (aq) - → CaCO3 (s). Calcite has a Trigonaal crystal system and belongs to the space group R-3c. A very pure form of calcite is also called weldubbelspaat because of the birefringence of light in this mineral. It has a romboëdrische structure and is sometimes found as romboëdrische prisms, but it is also common in other forms such as, for scalenoëdra, or in filamentous, grainy, granular or compact form. The crystal structure is mainly due to the temperature, degree of supersaturation in the vicinity of the crystal and the CO2 pressure. The calcietstructuur is the stable modification of CaCO3 at room temperature. There is another form, aragonite, passing at 743K in calcite. In pure crystalline form of calcite is clear, colorless, translucent, but by impurities (such as copper or sodium salts) it can take many colors such as gray, blue, violet, green and even black. Often, it is also opaque white. The mineral may exhibit both phosphorescence and fluorescence. The hardness is by definition 3. Calcite is highly birefringent. This optical property was first described by Rasmus Bartholin when the Icelandic form of the mineral, which consists of large crystal clear romboëders, became available. Christiaan Huygens gave the first statement with his wave theory of light. Calcite is a common constituent of sedimentary rocks, veins and inkarstgebieden in deposits in hot springs and caves (as stalactite). It is the mineral which forms of limestone and therefore the most common mineral of biological origin. Calcite is the main component of limestone, chalk and marble and is a major constituent of limestone, calcareous sandstone and limestone shale. Calcite gives the chemical weathering in igneous and metamorphic rocks, which are sedimentary rocks formed. Calcite is under slight pressure soluble in CO2-containing water. While the fall in the air absorbs the rainwater gasvormigekoolstofdioxide on, making it more acidic. This acidic rainwater is able to dissolve lime. In underground streams can convey this material in solution to, upon contact with atmospheric pressure, CO2 escapes and the calcite precipitate. So wordenstalagmieten and stalactites formed in caves.

The most beautiful minerals, fossils and gemstones from Madagascar Madagascar, officially the Republic of Madagascar and previously known as the Malagasy Republic, is an island country in the Indian Ocean, off the southeastern coast of Africa. The nation comprises the island of Madagascar (the fourth-largest island in the world), as well as numerous smaller peripheral
islands. Amongst it's famous spot for diving and swimming it is famous for it's high quality gemstones that are extracted from the soil and rocks. We at Timmersgems can say with proud that we are the second largest importer for Madagaskian gemstones in Europe just after a French company. Anualy we have at least 3 large containers filled with the most beautiful gemstones, minerals and bufallo horns. If you take a look in our webshop and showroom you will come accross great Labradorite, Amethyst, Citrine, Rose Quartz and many many other great ones. We are doing business with 17 small family businesses on the island and this way we can guarantee you the best prices in the market for best gemstones and minerals. Also we support these families since we started our business 35 years ago we are almost in love with the island,it's people and the products. Every year it is a great thing to visit the island and find the best stones for you. Also we support all the small family businesses and their children to give them a good education, also we support in local infra structure an water transportation. Madagascar's natural resources include a variety of unprocessed agricultural and mineral resources. Agriculture, including raffia, fishing and forestry, is a mainstay of the economy. Madagascar is among the world's principal suppliers of vanilla, cloves and ylang-ylang. Other key agricultural resources include coffee, lychees and shrimp. Key mineral resources include various types of precious and semi-precious stones, and Madagascar currently provides half of the world's supply of sapphires, which were discovered near Ilakaka in the late 1990s. The island also holds one of the world's largest reserves of ilmenite (titanium ore), as well as important reserves of chromite, coal, iron, cobalt, copper and nickel. Several major projects are underway in the mining, oil and gas sectors that are anticipated to give a significant boost to the Malagasy economy. These include such projects as ilmenite and zircon mining from heavy mineral sands near Tôlanaro by Rio Tinto Madagascar is a very poor country witgh a lot of flora and fauna, On Madagaskar you can find 400 plants and animals you will never find anywhere in the world. Also the minarals blue celstite, Labradorite and polychrome & Oceanjasper are found only on Madagascar.
Product videos