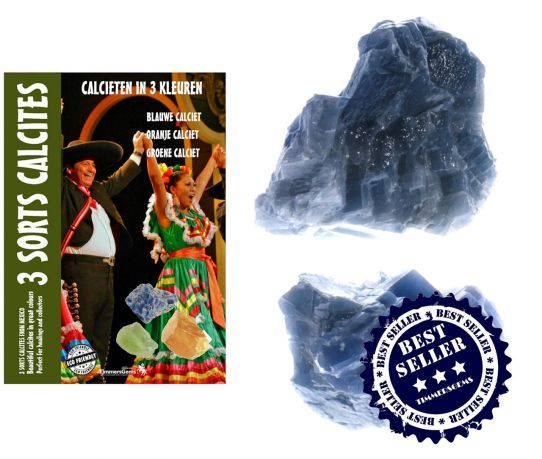 Very intense dark blue color. Cheaper Blue Calcite available from Madagascar for a few euros, but overall does not compare to the quality of Mexico.
Log in
Availability: In stock
SKU
784
Add to Compare
Blue Calcite comes from Nueveo Leon in Mexico is available to buy in increments of 3
Details

The mineral calcite (also known as calcite) consists mainly of the salt is calcium carbonate (CaCO3), and is one of the most common mineral in the earth's crust. Calcium carbonate is caused by soluble calcium ions come in contact with CO2 (carbon dioxide forms a carbonate ion as a positive ion is in a solution). Calcium carbonate is a poorly soluble salt, which makes the formed CaCO3 precipitates; this is going according to the following reaction: Ca2 + (aq) + CO32- (aq) - → CaCO3 (s). Calcite has a Trigonaal crystal system and belongs to the space group R-3c. A very pure form of calcite is also called weldubbelspaat because of the birefringence of light in this mineral. It has a romboëdrische structure and is sometimes found as romboëdrische prisms, but it is also common in other forms such as, for scalenoëdra, or in filamentous, grainy, granular or compact form. The crystal structure is mainly due to the temperature, degree of supersaturation in the vicinity of the crystal and the CO2 pressure. The calcietstructuur is the stable modification of CaCO3 at room temperature. There is another form, aragonite, passing at 743K in calcite. In pure crystalline form of calcite is clear, colorless, translucent, but by impurities (such as copper or sodium salts) it can take many colors such as gray, blue, violet, green and even black. Often, it is also opaque white. The mineral may exhibit both phosphorescence and fluorescence. The hardness is by definition 3. Calcite is highly birefringent. This optical property was first described by Rasmus Bartholin when the Icelandic form of the mineral, which consists of large crystal clear romboëders, became available. Christiaan Huygens gave the first statement with his wave theory of light. Calcite is a common constituent of sedimentary rocks, veins and inkarstgebieden in deposits in hot springs and caves (as stalactite). It is the mineral which forms of limestone and therefore the most common mineral of biological origin. Calcite is the main component of limestone, chalk and marble and is a major constituent of limestone, calcareous sandstone and limestone shale. Calcite gives the chemical weathering in igneous and metamorphic rocks, which are sedimentary rocks formed. Calcite is under slight pressure soluble in CO2-containing water. While the fall in the air absorbs the rainwater gasvormigekoolstofdioxide on, making it more acidic. This acidic rainwater is able to dissolve lime. In underground streams can convey this material in solution to, upon contact with atmospheric pressure, CO2 escapes and the calcite precipitate. So wordenstalagmieten and stalactites formed in caves.