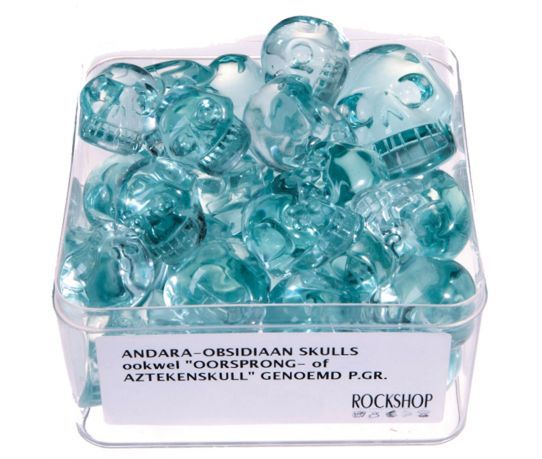 from Mexico The stone is 100% natural and is found near Chihuahua- the ancient Aztec / Inca environment.
Log in
Availability: In stock
SKU
489
Add to Compare
Andara Obsidian skull also Origin or Aztec Skull is available to buy in increments of 50
Details

Andara Obsidian is heliocentric. That is, they both absorb and reflect light, causing them to work extra healing. If you look around in natural sunlight through the stone is easily spotted. This will help increase your level of consciousness and promotes spiritual growth. The Andara obsidian is one of the stone within the family jewels with great healing effect. They can be used for all kinds of healings and also helps in increasing your awareness and accessibility to other dimensions. The Andara Obsidianen come in various colors and energetic vibrations; From light to dark, bright to champagne, silver, blue, amber and the rarest of all, green, yellow, pink and lavender. All stones are ideal for meditation and make it even easier to get into a good deep meditation. The Andara Obsidians are known earlier also by shamans and high priests to be used. Obsidian is a naturally occurring volcanic glass. The name derives from a Roman who was called Obsius and in antiquity would have an obsidian-like stone found in Ethiopia. Obsidian is created at a rapid cooling of lava having a water content of up to 3-4%. If the content of volatile components (water, carbon dioxide) is higher arises pumice, because the gases as a blowing agent to work. The formation of volcanic glass is highly dependent on the viscosity of the liquid lava and this is in turn strongly influenced by the content of silicic acid. The higher the level, the slower the flowing liquid. Most obsidianen have a silica content of 70% or more and are therefore included in the ryolieten. Less often be found trachitische, andesitic and fonolithische obsidianen which have a lower silica content. The color of obsidian varies quite widely, depending on the impurities it contains. The color is most dark green to deep black, although granite with a similar composition is a light colored material. Usually very finely divided hematite or magnetite to the cause. Sneeuwvlokobsidiaan contains inclusions of spherical grown structures, most of feldspar or cristobalite, which are called spherulites. They are produced by spherical crystal growth from a single central urban growth. Obsidian is a meta-stable material which falls back on the long term, in its crystalline, more stable form. Volcanic glass is not known from the Paleozoic and Precambrian period. In the Stone Age obsidian was a coveted commodity because it is razor-sharp cutting edges. It was used for knives and weapons. Today it is a popular material for art objects and is also used as a gemstone in jewelry. It is then cut as if it is a crystal.