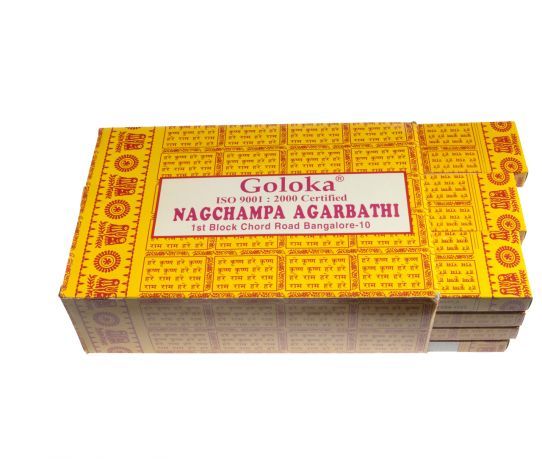 The first incense Nag champa, which can be described as "a strong primal scent" that you smell throughout India!
Log in
Availability: In stock
SKU
181
Add to Compare
Goloka Nag champa incense 12 pack 15 grams packing Satya. is available to buy in increments of 1
Details

FRAGRANCE PERCEPTION: Goloka Nag Champa Agarbatti (100% natural incense). By most people, along with the Satya Sai Baba Nag Champa, seen as the best incense. Deliciously sweet-scented spicy yet not too heavy and a little different than the other Nag Champa. Contains real ethereal oils and herbs and is 100% natural.

Nag Champa is one of the most famous types of Indian incense fragrance. Plumeria species, known in the West as Frangipani, Champa have in their names. Champa is the yellow flower of the Champac (or Champaka) tree used to give the typical flavor to this type of incense. Champa incense containing a semi-liquid resin, "Halmaddi," (Halmaddi is hygroscopic) originating from the Ailanthus Malabarica tree, to which they owe their characteristic gray color and moist texture. Besides halmaddi Nag Champa also contains sandalwood resin and is one of the world's most popular incense, with the ashram of the late Sathya Sai Baba as the selling variety. Nag Champa incense is not only found in well in soaps, lotions, scented oils and candles.

What you probably did not know of Nag Champa:
1. Bob Dylan lit Nag Champa at his concerts, and it is so popular among fans of Bob Dylan. As a result, The Grateful Dead, and more recently Akron Family, The Black Crowes and Third Eye Blind also started burning Nag champa during their concerts.
2. Stevie Nicks refers to Nag Champa in her song Illume 9/11 on the Fleetwood Mac album Say You Will (2003).
3. Rapper Common has a song titled "Nag Champa (Afrodisiac for the World)" on his album Like Water for Chocolate.

There is a place called Chamba, in the same district, which lies in the west of the Himalayas. This place, which used to be called Champa and where many Champaka-trees grow, was guarded by the goddess Champ Avati (known as Chameshni). Possibly, descended the name of Champa. Nag in India literally means "Cobra".

One of the most famous Nag Champa incense is the Satya Sai Baba Nag Champa Agarbatti. It is said that these Nag Champa's best and best-selling incense in the world. Many think the famous Guru "Sai Baba" the inventor, or even the manufacturer of this incense brand. This is not true. Sai Baba made this incense will become famous and is considered "patron" in view of this incense. It is said that this incense is made under his supervision. A brief explanation of the meaning of this brand name: Satya: truth. Sa: Divine. ai / ayi: mother. Baba: father. Agarbatti: incense sticks (hand is dhoop: no incense sticks).