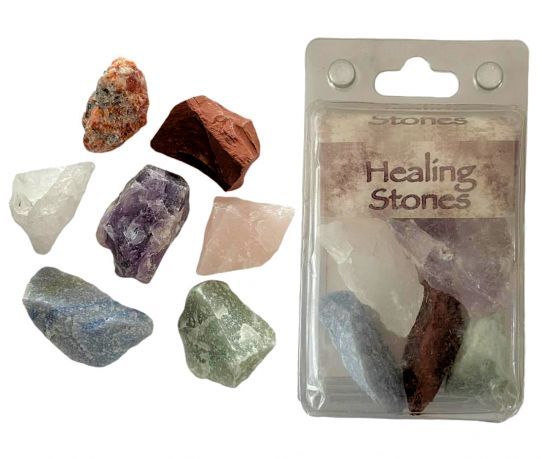 Chakra bracelet made of 7 types of gemstone "nuggets", the model for 2021!

Chakra stones for all chakras in beautiful sales blister! (BESTSELLER)

We sell this item every day! 7 beautiful raw chakra or healing stones in a simple sales blister!
Log in
Availability: In stock
SKU
11037
Add to Compare
Chakra stones for all chakras in beautiful sales blister! (BESTSELLER) is available to buy in increments of 1
Details

Chakra (Pali: chakka, Tibetan: khorlo, Malay: cakera) is a term from traditional Indian culture / religion for places in the supposed etheric double or energy body of man that are considered important within that tradition for their life force. Chakra (Sanskrit cakram) means circle or wheel. Physiological or other medical influences of chakras on the human body have not been scientifically proven, nor the existence of chakras themselves. It is a metaphysical / philosophical concept. There are numerous interpretations and interpretations of the concept of chakra, depending on tradition and cultural differences. Most traditions use the following seven chakras, from bottom to top (with a number of claims made about the individual chakras in New Age and many yoga schools):

First chakra Muladhara (मूलाधार, Mūlādhāra) Muladhara means root and this root chakra is located just below the coccyx. The Muladhara would make the connection between the body, the earth and the way you move in the world. Each chakra has physical, emotional and spiritual components. Physically, the first chakra is associated with problems with the lower back, colon, bones, hips and buttocks. All these parts belong to the lower part of the body, where the first chakra is located. These are usually the solid parts that provide support and the base, such as the pelvis.

Second chakra Swadhisthana (स्वाधिष्ठान, Svādhiṣṭhāna) Swadhisthana means sweetness and is situated at the level of the sacrum. Because of this it is also called the sacral chakra. The Swadhisthana (sacrum chakra) is connected to the gonad, genitals, sacrum, pelvic area, uterus, kidneys, bladder, circulation and water balance.

Third chakra Manipura (मणिपूर, Maṇipūra) Manipura means brilliant jewel or gem-filled and is situated at the level of the navel. The Manipura (navel chakra) is seen as the most important place for storing energy. It is associated with the pancreas, stomach, gallbladder, liver, spleen, small intestine, abdominal cavity and vegetative nervous system. This chakra regulates digestion and has a major influence on the functioning of the lower body, stomach, liver and spleen.

Fourth chakra Anahata (अनाहत, Anāhata) Anahata means unharmed or unharmed and is situated at the level of the heart. The Anahata (heart chakra) connects the lower three chakras of the instincts with the top three chakras of the higher human consciousness. This chakra controls the functioning of the heart, lungs and breathing. Stable circulation, a strong heart, a healthy heart rhythm and deep, relaxed breathing indicate that the heart chakra is in balance.

Fifth chakra Vishuddha (विशुद्ध, Viśuddha) Vishuddha, also called Vishuddhi, is situated at the level of the throat. The Vishuddha (throat chakra) is the sound and speech center in the body. The fifth chakra (also called throat chakra) connects the heart center with the forehead chakra and is considered the mediator between feeling and thinking. They attune this chakra to each other and ensure, for example, that the ratio does not get the upper hand.

Sixth chakra Ajna (आज्ञा, Ājñā) Ajna is located on the forehead and is also called the third eye chakra. The Ajna (third eye chakra), as a spiritual center, provides attention and awareness. An important symbol for the sixth chakra is Shakti Hakini, an androgynous deity, representing both the masculine and feminine aspects (transcending duality). The Ajna chakra (also called third eye chakra) provides the connection with the spirit world and opens the gates to intuitive knowledge and refers to a reality that emerges as soon as the dualistic perception of the world is transcended and the thoughts settle. . Because the forehead chakra affects the functioning of all endocrine glands, it is essential to health.

Seventh chakra Sahasrara (सहस्रार, Sahasrāra) Sahasrara is situated above the head. The Sahasrara (crown chakra) is related to spirituality and enlightenment. This seventh chakra has to do with striving for higher states of consciousness. An opened seventh chakra creates a feeling of deep peace and harmony beyond duality. This leads to experiences of total happiness and establishes the connection with a reality that is beyond thought. The energy of this chakra can lead to reaching the Mahatma, 'the great soul'.

Droopy gnomes, engraving in various types of gemstone from Hong Kong.
Log in